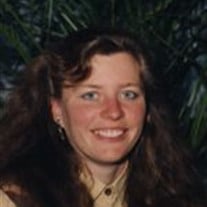 Services for Nicki Eve Rickard, 44, of Marshall will be on Wednesday, August 4, 2010, at 2:30 p.m. at Christ Lutheran Church in Cottonwood. Burial will be at the Calvary Cemetery in Marshall. Visitation will be Tuesday at the Hamilton Funeral Home in Marshall from 5-7 p.m. with a 7 p.m. prayer service. Visitation will continue at the church on Wednesday, one hour prior to the service. Nicki died Friday, July 30, 2010, after a courageous fight against Melanoma. She was born on June 4, 1966, to Eve (Thompson) and Randal Rickard Jr. She was baptized and confirmed at Wesley United Methodist Church in Marshall. Nicki graduated from Marshall High School in 1984, and continued on to earn Degrees in Agricultural Business and Finance at SDSU and SSU. Most of her life was spent in the Marshall area, but she did live a short time in both the foothills of New Mexico and the Sunbelt Valley in Idaho. Nicki was a hard worker and had a variety of jobs leading up to her dream job of owning her own business Professional Pet Grooming. Her work experiences varied from training horses, giving riding lessons, working in the fast food industry, pharmaceutical and retail sales, working in hog operations, driving sugar beet trucks, and grooming for area vet clinics. Nicki opened Professional Pet Grooming in March of 2003. The boarding portion of the business was added about a year and a half later. Nicki credited her mother for teaching her how to groom, and through her own business, she also taught several successful groomers the trade. Nicki's passions in life included caring for animals especially horses, cats, dogs, goats, and pet pigs. As a child, she loved showing animals in 4-H and was a member of the Grandview Willing Workers and Lake Marshall Eagles. She was a member of the Circle Star Saddle Club, Western Saddle Club Association, American Quarter Horse Association, ApHC--Appaloosa Horse Club, and certainly others throughout her life. Nicki was a very decorated competitor in the show ring, and often gave her trophies and ribbons away to kids as a way to make them feel special because she simply had too many of them. At the time of her diagnosis, Nicki was ranked 10th in the nation in non-pro hunter under saddle as far as points associated with the Appaloosa World Show. Nicki qualified for the Appaloosa World Show at least four times with Ed who is only six years old. Showmanship was her favorite class. Nicki taught many, many people to love and ride horses, to groom and care for animals, but most importantly she taught discipline, responsibility, perseverance, gentleness and toughness. These characteristics, she would say, she learned from her dad. During times of trouble, Nicki would expect you to suck it up, walk on and smile, smile, smile! She would expect you to clean your stalls, groom your animals, clean up your mess, make sure there is regular meal times (for the animals and you), and that you are up early and prepared to work every day of your life. Her thought was that you could treat yourself with something you enjoy when the moon is high and a productive day is done. Nicki fought her final battle with her spirit of strength, determination, intellect, and her heart wide open. Through it all, she kept a smile on her face and refused to sidestep what she saw as her responsibilities to her kids, friends, family and most importantly her horses and animals. What an amazing woman! Nicki will be greatly missed. Survivors include parents Eve and Al Koch of Cottonwood, Jean Rickard of Lake Shetek, siblings Sara VanLeeuwe and Brad VanLeeuwe of Marshall, aunts and uncles, cousins Dawn Walters and Shawn Koch, as well as many others. She is also survived by her animals; Hunting for Scotch (a.k.a. her horse Ed), Skips Finest Dude (a.k.a. Dude), Reba the pig, Tootsie the goat, Cuddles, Tyson, Tillie, Peabody, Mittens, & Alex the cats, and many friends from her horse and dog families. She was preceded in death by her father Randal Andrew Rickard Jr., grandparents Ralph and Gay Thompson, Randal Andrew Rickard Sr., Marge Rickard-Carlson, Carl Carlson, Oscar and Joan Versaevel, sibling Rhonda VanLeeuwe, uncles Jon Roger Thompson and Gordon Knutson, cousins Kristal Warnke and Dennis Verstraete, horse Princess of Gold, cats Pepper Cat and Scruffy Burdock, Piggitty Ann and Billy the goat. Blessed be her memory.

Services for Nicki Eve Rickard, 44, of Marshall will be on Wednesday, August 4, 2010, at 2:30 p.m. at Christ Lutheran Church in Cottonwood. Burial will be at the Calvary Cemetery in Marshall. Visitation will be Tuesday at the Hamilton Funeral... View Obituary & Service Information

The family of Nicki E. Rickard created this Life Tributes page to make it easy to share your memories.

Services for Nicki Eve Rickard, 44, of Marshall will be on Wednesday,...

Send flowers to the Rickard family.