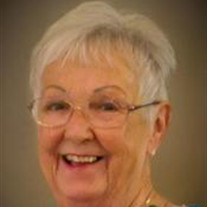 Marshall: Nona G. Swift, age 75, of Sioux Falls, formerly of Marshall and Russell, passed away at her residence in Sioux Falls of an apparent heart attack on Sunday, July 1, 2012. Funeral services will be 11:00 A.M. Friday, July 6th at Grace First Parish in Russell. Visitation will be 5:00 P.M. to 8:00 P.M. with a 7:00 P.M. prayer service Thursday at the Hamilton Funeral Home. Visitation will continue at the church on Friday, one hour prior to the service. Burial will be in the Bethel Cemetery in Custer Township. Nona Gail Coyle was born November 24, 1936 to Blaine and Mattie (Strunk) Coyle in Garvin, Minnesota. She was the youngest of 4 children. She attended school in Russell, Garvin, and Tracy, MN. In 1952 she moved with her parents to San Diego, CA where she graduated from Helix High School. After high school she attended college and worked at a drive-in movie theatre before she began her career with Southwestern Bell. She married Jesse Swift on December 7, 1956 in San Diego, CA where they made their home. They had 3 daughters: Carrie, Melinda and Shelly. In 1973 they moved to Russell, MN where she continued her career with Northwestern Bell until her retirement in 1992. She lived in Russell, Marshall, Rochester and, for the past 20 years, in Sioux Falls, SD. Her second home was Yuma, AZ where she spent the past 20 winters. She participated in multiple park choirs and annual talent shows where she was known for her renditions of “Santa Baby” and “Rindercella.” She was an active participant in her park church. She considered her Yuma friends her second family. Nona enjoyed crossword puzzles, all word games, was an avid Wheel of Fortune fan and found special joy in identifying grammatical errors in printed text. She cross-stitched a Christmas ornament each year for her grandchildren. She was a Sweet Adeline for several years in Marshall. She spent countless hours patching blue jeans for her grandchildren and their friends. Nona’s monkey bread and award-winning spice cake were “must have” items at all family gatherings. Survivors include her daughters Carrie Hansen, Marshall, Melinda (Mark) Buss, Marshall, and Shelly Ritchie, Sioux Falls, SD; grandchildren Emily (Ben) Doherty, Renae Hansen, Jesse (Danica) Buss, Spencer Buss, Scott Buss, Brett Ritchie, Erica (Jesse Frost) Ritchie; and sister, Jeanene (Dayle) Swift of Russell. She was proceded in death by her husband, Jesse in 2000, parents Blaine and Mattie Coyle, and siblings Waldo Coyle and Joann Almhjeld. Blessed be her memory

Marshall: Nona G. Swift, age 75, of Sioux Falls, formerly of Marshall and Russell, passed away at her residence in Sioux Falls of an apparent heart attack on Sunday, July 1, 2012. Funeral services will be 11:00 A.M. Friday, July 6th at Grace... View Obituary & Service Information

The family of Nona Gail Swift created this Life Tributes page to make it easy to share your memories.

Send flowers to the Swift family.