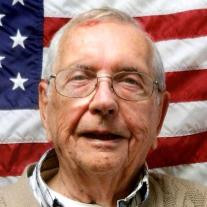 Norman Postera, age 90, of Marshall, Minnesota, passed away on Thursday, September 29, 2016, at the Avera Morningside Care Center in Marshall. Memorial Services are 11:00 A.M. Friday, October 7, 2016 at Good Shepherd Lutheran Church in Marshall. Following a reception, interment will be in the Marshall Cemetery. Visitation will be 4:00 P.M - 8:00 P.M. Thursday, October 6, at the Hamilton Funeral Home. A prayer service will be held at 7:00 PM. Visitation will continue on Friday one hour prior to the service, from 10:00 – 11:00 AM, at the church. Clergy Officiating: Rev. James Stefanic Military Honors Provided By: Marshall American Legion, Post 113 Norman Henry Postera was born February 11, 1926 in Edgeley, North Dakota. He was the son of Henry Postera, an immigrant and naturalized citizen from Baden, Germany, and Minnie (Schulz) Postera, a first-generation American citizen. He was baptized into the Lutheran Church in Edgeley on March 26, 1926. His family farmed until the difficult years of the Great Depression, when the farm was lost. The family then moved to White, South Dakota where Norm was confirmed in the Zion Evangelical Lutheran Church and graduated from high school in 1944. He joined the U.S. Army as a rifleman, serving tours in Europe at the close of WWII. Returning home in 1946, he went to work in the White Creamery. He was schooled in commercial refrigeration, graduating and subsequently working in both Aberdeen, SD and Mankato, MN. In 1953, he set off on an adventure with a few buddies to build a new pulp mill in Ketchikan, Alaska, then just a territory of the United States. While there, he met a beautiful young woman who would later become his bride. In 1954 he took a job with Carlson & Stewart Refrigeration in Marshall, MN. On July 19, 1958, he married Jeanette Louise (Hopkey) Towle, and adopted her children, Roger Lee and Marjorie Lynn, as his very own. He and Jeanette became the proud parents of their own children, Kathy Ann and Janice Kay. Joining the congregation of Good Shepherd Lutheran Church in 1966, they provided a strong religious background and faith for their family. Norm formed his own business in 1979, Countryside Refrigeration, servicing dairy farms throughout southwestern Minnesota and southeastern South Dakota. In 1991, he “retired”. Jeanette’s passing in 1996 left Norm with a lot of time on his hands. He returned to work, this time as a handy man for True Value Home Center in Marshall, and continued working for another 18 years. At age 88, the onslaught of dementia forced him into a final retirement. Norm was a talented woodworker, an avid reader and bird watcher, and possessed the heart of a giver. He crafted innumerable wood projects and pieces for church, charities, people he loved and for his own enjoyment. His truest desire was to be useful to others. While the work of his hands endures, he will be remembered most for his gentle spirit, his sense of humor and his quiet manner. He passed away at Avera Morningside Heights on September 29, 2016. He reached the age of 90 years, 7 months, and 18 days. Blessed be his memory. Norm is survived by one son and his spouse, Roger and Beverly Postera of Chaska; three daughters, Marjorie Lemke of Mound, Kathy Dahl of Marshall, and Janice Paul and spouse Allan of Marshall; four grandchildren, Casi Mulenburg, Terry Mulenburg, Shawn Postera, Ann Postera; and two great-grandchildren, Tori Farbisz and Jarek Farbisz. He was preceded in death by his wife, Jeanette; his sister, Ramona Barron; two infant siblings, Maynard and Mildred; and his parents, Henry and Minnie.

The family of Norman Henry Postera created this Life Tributes page to make it easy to share your memories.

Norman Postera, age 90, of Marshall, Minnesota, passed away on...

Send flowers to the Postera family.