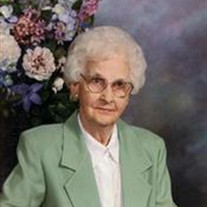 Marshall: Opal C. Johnson, age 96, of Marshall, passed away at the Prairie View Health Care Center in Tracy on Wednesday, October 10, 2012. Funeral services will be 11:00 A.M. Monday, October 15th at St. Stephen Lutheran Church. Visitation will be one hour prior to the service. Burial will be in the Marshall Cemetery. Opal Christina was born on January 23, 1916 in Tyler, Minnesota to Lars and Gertrude Olson. She was baptized and confirmed at Peace Lutheran Church in Ruthton. She graduated from the Ruthton High School. On May 17, 1941, Opal was united in marriage to Marvin Johnson. They farmed in Etna Township in Murray County until retiring and moving to Marshall in 1966. Opal was an active member of Peace Lutheran and St. Stephen churches and enjoyed quilting. The love of her life was her family. She enjoyed doing things with them and for them. She also enjoyed flower gardening. Marvin passed away in 2001 and Opal continued to live at her home until she entered the Prairie View Health Care Center on September 27th and passed away there on Wednesday, October 10th. She had reached the age of 96 years, 8 months and 17 days. She is survived by her three children, Marlowe of Marshall, Gary (and Judy) of Heron Lake and Judy (and Dan) Sorenson) of Marshall; four grandchildren, Susan LaMorie, Kim Dronen, Jackie Weinberg and Ron Schillman; eight great grandchildren, Holly Weinberg, Josh Weinberg, Gage Dronen, Garrett Dronen, Grant Dronen, Kennedy Dronen, Levi Weinberg and KatiAnn Weinberg; also many other relatives and friends. She was preceded in death by her parents and several brothers and sisters. Blessed be the memory of Opal C. Johnson

The family of Opal Christina Johnson created this Life Tributes page to make it easy to share your memories.