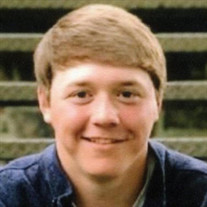 Parker Viaene, age 20, of Cottonwood, Minnesota, died on Saturday, April 10, 2021, as the result of an ATV accident near Cottonwood. A Celebration of Parker will be 10:00 a.m. Thursday, April 15, 2021, at Swan Lake Evangelical Free Church in Cottonwood, Minnesota. Interment will follow in the St. Clotilde Cemetery. Visitation will be held from 4:00 – 8:00 p.m. on Wednesday, April 14, 2021, at the Hamilton Funeral Home in Marshall. A Time of Sharing and Celebrating of Parker’s Life will be at 7:00 p.m. Visitation will continue one hour prior to the service, from 9:00 – 10:00 a.m., on Thursday at the church. Occupancy limits and social distancing must be observed throughout all services. Masks are still required at all public indoor gatherings. In lieu of flowers, memorial donations may be made out to the Parker Viaene Scholarship Fund. A live stream link for Parker’s Time of Sharing will be available on the Hamilton Funeral Home website starting at 7:00 p.m. on April 14, 2021. Parker Ryan Viaene was a blessing and miracle from the very beginning on April 9, 2001 to his loving parents, Ryan and Tara (Claude) Viaene at the Marshall hospital. They brought him home to the family farm where his love for life, farming and nature began to grow. As a toddler, Parker felt clothing was optional and would beg his Dad to “chase me” around the table in his underwear. This same toddler would melt his Mom’s heart daily with his smile and charm. Parker’s sister, Paige joined the family two years later and the four fiercely loved and valued life together. Parker was his Dad’s shadow, when he was only a few weeks old, he already was riding in the tractor with his Dad. When he was supposed to be sleeping, he would be peeking through his bedroom shades to watch his Dad in the shop working on the demolition cars. It was this curiosity that Parker learned the workings of farm life and cultivated a deep appreciation for nature. The family enjoyed participating in horse shows, 4-wheeling, hunting, fishing and derbies. Parker attended Lakeview Public School in Cottonwood, Minnesota. He enjoyed spending time with his friends and making them laugh with his humor. He played on the high school football team and shot on the high school trap team. Parker was a magnificent shot and won many awards and because of this marksmanship, his hunting skills was second to none. Parker enjoyed going to youth group at Swan Lake Evangelical Church where he was dedicated, and baptized on August 18, 2013. From a young age he would memorize Bible passages with the coaching of his Mom. He had a strong faith in God and it reflected in who he was. Parker cared for others and wanted to bring others joy, he even dressed up as Santa Claus many years to bring smiles to his cousins’ faces. Parker’s first love was farming. He was his Dad’s right hand man, working side by side with the rest of his family. He worked part time for two years for Lyon County Parks and was scheduled to start working for the Farmer’s Co-op for his internship. He was currently attending Ridgewater College pursuing a degree in Ag Business. His life’s dream was to farm with his Dad on the family homestead. Every harvest, Parker would be in the field working the ground with his case of pop, bag of candy and favorite music playlist. Parker was an accomplished welder and mechanic. He spent countless hours working on his Demolition Derby Car in preparation for the upcoming derby season. Parker passed away suddenly in a tragic accident on April 10, 2021, a day after his 20th birthday. He will be remembered for the love and pure happiness he brought to those lucky enough to know him! Parker is survived by his parents, Ryan and Tara Viaene of Cottonwood; sister, Paige Viaene of Cottonwood; paternal grandparents, Robert (Laurie) Viaene of Cottonwood, Jacqueline (Andy) Kreuzer of Canby; maternal grandma, Cheryl Claude of Delavan; aunts and uncles, Jessica (Shawn) Laleman of Marshall, Robbie (Jena) Viaene of Marshall, Angela (Jason) Sippel of Minneota, Barbara (Matt) Crozier of Loveland, CO; cousins, Lane Goebel, Isabella Laleman, Carson Viaene, Corbin Viaene, JC Sippel, Carter Crozier, Kensley Crozier; girlfriend, Alysen Zwart; as well as extended family and many friends. He is preceded in death by his maternal grandfather, Kenneth Claude.

Parker Viaene, age 20, of Cottonwood, Minnesota, died on Saturday, April 10, 2021, as the result of an ATV accident near Cottonwood. A Celebration of Parker will be 10:00 a.m. Thursday, April 15, 2021, at Swan Lake Evangelical Free Church in... View Obituary & Service Information

The family of Parker Ryan Viaene created this Life Tributes page to make it easy to share your memories.

Send flowers to the Viaene family.