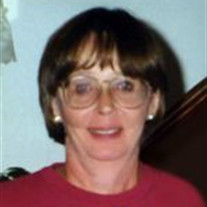 Patricia Ellen Miller, age 57, of Lynd, died on Friday, February 29th. , 2008 at the Sanford Hospital in Sioux Falls, South Dakota. Funeral services will be held on Tuesday, March 4th, 2008 at 11:00 a.m. at the First Lutheran Church in Marshall. Interment will take place in the Morton City Cemetery. Visitation will be held on Monday from 5 to 8 p.m. at the Hamilton Funeral Home and on Tuesday one hour prior to the funeral at the church. Patricia Ellen Middleton, the daughter of William and Lucile Middleton was born on July 13, 1950 in Redwood Falls, Minnesota. She attended school in Morton and graduated from Morton High School. On December 10, 1994 she was united in marriage to Bruce Miller in Marshall, MN. Patricia was employed at SMSU for 32 years. Patricia and Bruce collected M&M’s. She was a vivid Viking Fan, enjoyed jigsaw puzzles, playing cards, camping, her swimming pool, plants of all kinds, and assisting Bruce with home remodeling projects. Patricia especially liked spending time with her grandchildren. She was a member of First Lutheran Church. She is survived by her husband, Bruce; two children, Mike (Anne) Nelson of Rapid City, SD, and Marc (Angie) Nelson of Tracy; three grandchildren, Leah, Emily and Jack Nelson; three brothers, Jim (Shari) Middleton of Michigan, Rolf (Karen) Middleton of St. Paul and Mike (Ann) Middleton of Virginia; her mother-in-law, Betty Miller of Redwood Falls; nieces, nephews and other relatives. She was preceded in death by her parents. Blessed be her memory.

The family of Patricia Ellen Miller created this Life Tributes page to make it easy to share your memories.