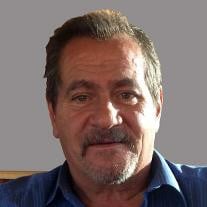 Paul Lightfoot, age 62, of Marshall, Minnesota, passed away on Monday, November 7, 2016, at his home in Marshall. Visitation is from 10:00 – 11:00 AM Thursday, November 10, 2016 at the Hamilton Funeral Home in Marshall. A prayer service will be at 11:00 AM, also at the Hamilton Funeral Home. Paul David Lightfoot was born on December 25, 1953 in Marshall, Minnesota. He was the son of Lawrence and Lucille (Mootz) Lightfoot. Paul raised near Vesta and attended school in Milroy and Redwood Falls. He made his home in Russell and Marshall, where he has worked for Patzer’s as a delivery driver for the last 20 years. He also assisted with the grounds work around his neighborhood, always willing to lend neighbors a hand. Paul tinkered with anything and very much enjoyed his mechanical and handiwork. He looked forward to the antique shows and loved spending time with his grandchildren when he could. Paul Lightfoot died on Monday, November 7, 2016, at his home in Marshall, Minnesota at the age of 62 years, 10 months and 13 days. Blessed be his memory. Paul is survived by his children, Nicole Lightfoot of Shakopee, Kandice (and David) Fuller of Doyline, LA; grandchildren, Kyrstin Lightfoot, Karlye Lightfoot, Kalybe VanWaterMuelen, Kaydance Fuller, Kadyn Fuller, Kayzlei Fuller; sister, Marlys Larson of Redwood Falls; brother, Bill (and Charlene) Lightfoot of Vesta; nephews, nieces, other relatives and friends. He was preceded in death by his parents, Lawrence and Lucille Lightfoot.

The family of Paul Lightfoot Sr created this Life Tributes page to make it easy to share your memories.

Paul Lightfoot, age 62, of Marshall, Minnesota, passed away on...

Send flowers to the Lightfoot family.