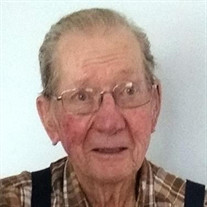 Paul Lund, Sr., age 90, of Marshall and formerly of Cottonwood, Minnesota, died on Tuesday, April 28, 2020, at his home at Boulder Estates in Marshall, Minnesota. Due to the current public gathering limitations, Private Family Funeral Services will be held on Friday, May 1, 2020, at Living Word Lutheran Church. Interment with military honors will follow in the Christ Lutheran Cemetery, Cottonwood, Minnesota. A public visitation will be held at a later date, when restrictions have been lifted. Paul Raymond Lund was born February 6, 1930, to Alfred and Clara (Erickson) Lund on a farm southeast of Cottonwood in Lucas Township, Minnesota. He was baptized at Silo Lutheran Church (now Christ Lutheran) and confirmed there as well in 1944. He attended grade school at District #19 in Lucas Township and attended one year of High School at Cottonwood, after which he stayed home to help on the farm. In 1952, Paul was drafted into the United States Army and served for two years. In 1954, he returned home and began farming. Paul was married to Margaret (Reishus) at Christ Lutheran Church in Cottonwood in 1968. They lived on the farm for many years. In 1995, they moved into Cottonwood, but Paul continued to help on the farm any way he could. He was a proud member of Cottonwood American Legion Honor Guard since 1954. Paul is survived by his wife, Margaret; sons, Greg (Mary), Paul Jr.; stepdaughter, Leslie Slosar; grandchildren, Alyssa (Tanner), Nathan, David; great-grandchildren, Norah and Emmitt; nieces, Susan (Rick) Foster, Karen (Dean) Berg; and great-niece and nephews, Amy, Kyle and Christopher. He was preceded in death by his parents; stepson-in-law, Gerry Slosar; his brother and sister-in-law, Arvid and Marlys Lund; and niece, Cheryl Lund. Blessed be his memory.

The family of Paul Raymond Lund Sr created this Life Tributes page to make it easy to share your memories.

Send flowers to the Lund family.