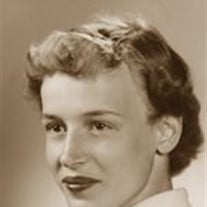 Peggy Hagemann age 74 of rural Milroy, passed away at her home on Monday, August 30, 2010. Funeral services will be 10:00 A.M. Friday, September 3, 2010 at Our Savior’s Lutheran Church in Milroy. Burial will be in the church cemetery. Visitation will be 5:00 P.M. to 7:00 P.M. with a 6:45 P.M. prayer service on Thursday at Hamilton Funeral Home. Visitation will continue at the church on Friday, one hour prior to the service. Peggy Freida Reuss was born on July 5, 1936 in Sycamore, IL to Walter Heinrich and Luella E. (Kunze) Reuss. She graduated from Sycamore High School before becoming employed by the Dekalb Agricultural Association in Dekalb, IL. Peggy was united in marriage to Wilbert Hagemann on June 28, 1958. They farmed near St. Charles, IL and then moved to a farm east of Milroy in 1974. They retired from farming in 1994. Peggy passed away at her home on August 30, 2010, in her daughter Donna's arms. She had reached the age of 74 years, 1 month and 25 days. She is survived by her four daughters, Christine (and Louie) Weber of Rogers, Patricia Decea (and Steven) of Las Vegas, NV, Nancy Urbanski of Eagan and Donna Hagemann (and Tom Marks) of Milroy; eight grandchildren, Jeff, Brenda and Brian Adkins, Neil and Michael Urbanski, Briana and Brooke Johns and Levi Long; five great-grandchildren; and one brother, Bob of Sycamore, IL. She was preceded in death by her husband, Wilbert in 2005; her parents, Walter and Luella; infant son, John Hagemann; brother, William; and sister, Betty. Peggy’s enjoyments in life were volunteering time as a Girl Scout Leader, Sunday School teacher and at the Milroy School, playing cards with family and friends, reading, watching her granddaughters’ dance team competitions, having lunch at the Oasis, and an intense fondness towards Golden Girls' TV reruns. Peggy was a faithful member of Our Savior’s Lutheran Church in Milroy where she was involved in Adult Study Groups for many years. She was also a member of the Milroy American Legion Auxiliary. Blessed Be The Memory of Peggy Hagemann. Hamilton Funeral Home 507-532-2933

The family of Peggy Freida Hagemann created this Life Tributes page to make it easy to share your memories.

Peggy Hagemann age 74 of rural Milroy, passed away at her home...

Send flowers to the Hagemann family.