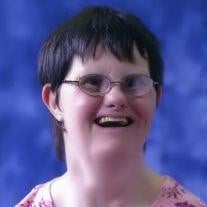 Peggy Louise Wehler, age 62, of Canby and formerly of Marshall, Minnesota, passed away on Monday, January 4, 2016, at her home in Canby, Minnesota. Memorial Services will be 2:00 PM Friday, January 15, 2016, at the Hamilton Funeral Home in Marshall. Visitation will be held one hour prior to the service, from 1:00 – 2:00 PM, also at the funeral home. Private Family Interment will be at a later date in the Memorial Gardens Cemetery, Worthington. Clergy Officiating: Rev. Scott Fuller (Psalm 23) Organist: Mary Hauschild Congregational Hymns: How Great Thou Art, You Are Mine Special Music: Carrie Underwood – “See You Again” Peggy Louise Wehler was born on December 9, 1953, in Worthington, Minnesota. She was the daughter of Benjamin and Louise (Hansen) Wehler. She moved to Faribault, Minnesota, in June of 1958, at age four. She moved to a group home in Marshall in October of 1973 and lived there until she moved to Canby in April of 2010. Peggy worked at Service Industries in Redwood Falls, Minnesota from 1987 to 1991. She then worked at Service Enterprises, Inc. until May of 2005. She enjoyed working in the cafeteria at the former Marshall High School, washing dishes and wiping tables and was very proud of this job. Peggy’s enjoyments in life included watching old western TV shows such as Bonanza and Big Valley or watching Little House On the Prairie. She loved visiting with others, spending time with friends and staff, participating in Special Olympics track meets, wearing fingernail polish, sharing her photo albums with others, going to work, “window” shopping, outings with staff, and dancing. In recent years she enjoyed going to the library, having staff read to her, going to the Dairy Queen, naps, listening to country music. Peggy did not care for bumpy roads, having her nap delayed or loud noises. Peggy died in Canby, Minnesota at the age of 62 years and 26 days. Blessed be her memory. Peggy is survived by her siblings, Sandra (and Roger) Olson of Litchfield, MN, Keith Wehler of Worthington, MN, Bill Wehler of Worthington, MN; half-siblings, Ben Brewer of Sioux City, IA, Betty LeFrenier of Seattle, WA, Naomie Kruger of Worthington, MN, Evelyn Petersen of Hanover, MN; nephews, nieces, other relatives; house staff, care takers and friends. Peggy was preceded in death and by her parents, Benjamin and Louise Wehler; and sister, Carol Wylie.

Peggy Louise Wehler, age 62, of Canby and formerly of Marshall, Minnesota, passed away on Monday, January 4, 2016, at her home in Canby, Minnesota. Memorial Services will be 2:00 PM Friday, January 15, 2016, at the Hamilton Funeral Home in... View Obituary & Service Information

The family of Peggy Louise Wehler created this Life Tributes page to make it easy to share your memories.

Peggy Louise Wehler, age 62, of Canby and formerly of Marshall,...

Send flowers to the Wehler family.