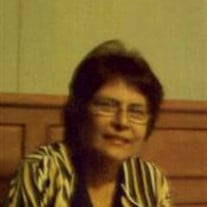 Marshall: Petrona Franco, age 58, of Marshall, passed away at the University of Minnesota Hospital on Saturday, August 13, 2011. Funeral service will be 7:00 P.M. on Monday, August 15th at the Hamilton Funeral Home. Burial will be in the Marshall Cemetery. Visitation will start at 4:00 P.M. Monday. Petrona was born on January 3, 1953 in Plan Cerrizo Grande, Guatemala to parent Juan and Simona (Ortiz) Franco. She immigrated to the United States in 1981. She first worked in the fields and waitressed until she moved to Marshall in 1994. She worked for Heartland then Schwans and her last job was cleaning for Gordy Rensink. Due to ill health she retired in 2008. Petrona dedicated herself to the Lord years ago, and was a faithful member of the Ministerios El Buen Samaritano where she was the president of the congregation for many years. She also donated the land in Guatemala where a church was established. Following in their mother’s footsteps, each of her children have joined the ministry. The love of Petrona’s life was her Lord, and spending time with her children and grandchildren and reading God’s word, the Bible. All her relatives and friends knew her as a wise woman and knew they could seek her console for their various issues. Petrona passed away Saturday, August 13, 2011 at the University of Minnesota Hospital. She had reached the age of 58 years, 7 months and 10 days. Petrona was dearly loved and will be missed by her five children, Erick, of Marshall, Norma, of Dawson, Julio, of Granite Falls, Eddie, of Marshall, and Brenda Flores of Granite Falls; seventeen grandchildren, Erick, Yasmin, Jonathan, Katherine, and Julio Flores Jr., Lucero Reyes, April Flores, Brandon, Ezequel, Ana Rosa and Ruben Soto, Eddie Jr., Juan Daniel, Jeremiah, Elijiah, Isayiah and Joseph Flores; and six siblings, Dominga and Teresa Franco, Everildo Ortiz, Damian, Miguel and Joselino Franco, all of Guatemala. She was preceded in death by her parents and five siblings. Blessed be the memory of Petrona Franco.

Marshall: Petrona Franco, age 58, of Marshall, passed away at the University of Minnesota Hospital on Saturday, August 13, 2011. Funeral service will be 7:00 P.M. on Monday, August 15th at the Hamilton Funeral Home. Burial will be in the Marshall... View Obituary & Service Information

The family of Petrona Franco created this Life Tributes page to make it easy to share your memories.

Marshall: Petrona Franco, age 58, of Marshall, passed away at...

Send flowers to the Franco family.