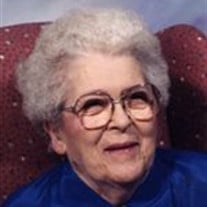 Phoebe Madden, age 92, of Lynd, died on Sunday, March 2, 2008 at the Avera Marshall Health Care Center. Funeral services will be Thursday, March 6, 2008 at 5:00 p.m. at Wesley United Methodist Church in Marshall. Visitation will be one hour prior to the service, at the church. Burial will be in the Lynd Cemetery at a later date. Arrangements are with the Hamilton Funeral Home in Marshall. Phoebe Theodosia Duvall, the daughter of Fred and Jesse Duvall, was born on June 29, 1915 in Cherokee, Iowa. She attended school through the eighth grade. On October 19, 1933 she was united in marriage to Leo Madden at Methodist Church in Benson, MN. Phoebe was employed at Lynd Public School as a cook for 31 years until her retirement in 1978. She was also employed at Camden State Park until 1984. Phoebe enjoyed spending her time sewing and cooking. She enjoyed playing cards and spending time with her family and friends. She especially enjoyed her grandchildren. She is survived by her two children, Melvin “Corky” (Rose) Madden of Lynd, MN and Darwin(Diane) Madden of Willmar, MN; six grandchildren, Bradley Leo (Cindy) Madden, Douglas Lawrence Madden, Dawn Marie (John) Zerr, Todd Michael (Karen) Madden, Stacy Jo (Tom) Springer, and Chris Gregory Madden; seven great-grandchildren and two great-great-grandchildren; and her sister Margaret Sandstrom of Benson, MN. She was preceded in death by her parents; Jessie and Fred Duvall, Husband; Leo Madden, Brothers; James, Charles, Robert, and Garlan, Sisters; Velma, Ethel, Eva, May, Margie and Lorraine, and Great-Grandsons; Jeffery Tomas and Jeremey Douglas. Blessed be the Memory of Phoebe Madden.

Phoebe Madden, age 92, of Lynd, died on Sunday, March 2, 2008 at the Avera Marshall Health Care Center. Funeral services will be Thursday, March 6, 2008 at 5:00 p.m. at Wesley United Methodist Church in Marshall. Visitation will be one hour... View Obituary & Service Information

The family of Phoebe Theodosia Madden created this Life Tributes page to make it easy to share your memories.

Send flowers to the Madden family.