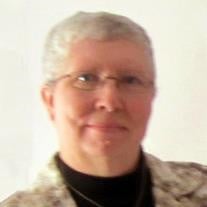 While wearing her favorite Red Baron t-shirt, Phyllis Adair Koch, age 63, of Garvin, Minnesota, passed away on Tuesday, July 11, 2017 after a 13-month battle with acute myeloid leukemia at the Colonial Manor in Balaton, Minnesota. Instead of retiring, she continued to work until it relapsed in April. Her Celebration of Life is 10: 30 a.m. Saturday, July 15, 2017, at Trinity Lutheran Church in Slayton, Minnesota. Following a reception, interment will be in the Hoiland Cemetery, rural Garvin, Minnesota. Visitation will be held from 5:00 – 8:00 p.m. Friday, July 14, 2017 at the Hamilton Funeral Home in Marshall. A prayer service is scheduled for 7:30 p.m. Visitation will continue one hour prior to the funeral service, from 9:30 – 10:30 a.m., on Saturday at the church in Slayton. Clergy Officiating: Rev. Doug Minton Organist: Kathy Schwartz Casket Bearers: Jim Koch, Brian Koch, Kendall Friese, Greg Friese, Judeen McEvoy, Doreen Dawson Honorary Casket Bearers: Schwan’s coworkers Phyllis Adair McConnell was born December 28, 1953, in Marshall, Minnesota to Maynard and Margrete (Dwire) McConnell. She was baptized on Sept. 5, 1954, at Wesley United Methodist Church in Marshall and was later confirmed in August of 1976 at Faith Lutheran Church in Tracy. Phyllis attended school in Marshall and graduated from High School with the class of 1972. She went on to further her education at Southwest State University in Marshall, graduating in 1976. Phyllis was united in marriage to Bruce Koch on June 5, 1976, at Wesley United Methodist Church. The couple made their home in rural Garvin and raised two boys: Kyle and Mark. Phyllis began her career with Schwan’s in 1973 and continued working for 44 years until relapse in April. She earned the Marvin Schwan Excellence Award just this year. Phyllis was a proud member of Trinity Lutheran Church in Slayton where she served in the choir, as treasurer, and the president and treasurer of the LWML. She was also a 4-H leader and Lyon County Extension Committee Member. Her other enjoyments in life included Knitting, Cross Stitching, four wheeling and spending time with her family. Phyllis went to her Heavenly Home on July 11, 2017. She reached the age of 63 years, 6 months, and 13 days. Blessed be her memory. Phyllis is survived by her husband of 41 years, Bruce Koch of Garvin; two sons, Kyle Koch of Warroad; Mark (and Lisa) Koch of Ramsey, five grandchildren, Mariah, Khloe, Addison, Brielle, and Bennett Koch; mother, Margrete McConnell of Marshall; nieces, nephews, other relatives, and many friends. She was preceded in death by her father, Maynard McConnell; father and mother-in-law, Melvin and Delpha Koch.

While wearing her favorite Red Baron t-shirt, Phyllis Adair Koch, age 63, of Garvin, Minnesota, passed away on Tuesday, July 11, 2017 after a 13-month battle with acute myeloid leukemia at the Colonial Manor in Balaton, Minnesota. Instead of... View Obituary & Service Information

The family of Phyllis Adair Koch created this Life Tributes page to make it easy to share your memories.

Send flowers to the Koch family.