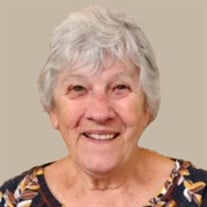 Phyllis Wallin, age 81, of Marshall, Minnesota, died on Monday, November 23, 2020, at the Avera McKennan Hospital in Sioux Falls, South Dakota. Memorial Services will be at 2:00 p.m. on Saturday, June 12, 2021, at St. Stephen Lutheran Church in Marshall. A visitation will be held one hour prior to the service, from 1:00 – 2:00 p.m., on Saturday, also at the church. Phyllis Joan Linstrom was born on June 14, 1939 in New London, Minnesota, to the late Arthur and Agnes (Ulrich) Linstrom. She was baptized and confirmed at the Mission Covenant Church in New London. Phyllis later became a member of Hope Presbyterian Church. She attended Willmar area schools and was a 1957 graduate of Willmar High School. On January 4, 1958, Phyllis was united in marriage to Everett Wallin at the Hope Presbyterian Church in Spicer. Phyllis was a loyal Air Force wife and mother and traveled with Everett as he was stationed on multiple Air Force bases, including; Davis Monthan (Tucson), Arizona; Fairchild (Spokane), Washington; Ellsworth (Rapid City), South Dakota; Grand Forks, North Dakota; Vandenburg (Lompoc) California; and even to the Philippines at Clark AFB. As a military wife, she was active in the NCO Wives Cub. While in the Philippines, Phyllis and her family had the privilege of watching the prisoners of war come home. In 1974, the couple, along with their three children, moved back to Willmar for a year, before eventually making their home in Marshall in 1975. After moving to Marshall, Phyllis worked at Johnson’s Paint and Wallpaper then became a Bank Teller at Bremer Bank until her retirement in 1995. Religion was very important to Phyllis. She belonged to St. Stephen Lutheran church, was a Lay Minister for St. Stephen Ministry, belonged to St. Stephen Church Counsel and was active with the funeral committee. She helped out at SMSU’s Campus Religious Center, was a previous board member for Heart to Heart along with her husband, Everett. Phyllis enjoyed volunteering at St. Stephen’s pre-school as a “Pre-school Grandma,” and used her “craftiness” as she volunteered her Thursdays to an adult care home here in Marshall. Phyllis was a master in crochet and knitting. She enjoyed keeping her hands busy and often made Prayer Shawls, doll clothes, and doilies for her family and friends. Phyllis had a knack for baking (especially her pies!) and had recently made 5 delicious pumpkin pies for her family as they celebrated an early Thanksgiving. Phyllis also enjoyed tending to her flowers and plants, socializing with her neighbors and family, and decorating for the holidays, especially Christmas. Phyllis Wallin died on Monday, November 23, 2020 at the age of 81 years, 5 months, and 9 days. Blessed be her memory. She is survived by her husband of almost 63 years, Everett Wallin of Marshall; 3 children, Lori Bodzioney of Roanoke, VA, Mark (Jodi) Wallin of Eden Prairie, MN, Brian Wallin of Brookings, SD; 6 grandchildren, Tony Bodzioney, Sabra (Christopher) Robitaille, Ian Wallin, Justin Schmid, Damien (Cheyanne) Wallin, Darrien Wallin; 3 great-grandchildren, Ryder, Keagen, Emersyn; 3 step great-grandchildren; brother, Marlin (Roberta) Linstrom of West Linn, OR; nieces and nephews, other relatives, and many friends across the country and beyond. Phyllis is preceded in death by her parents, Arthur and Agnes Linstrom; son-in-law, Hank Bodzioney; siblings, Richard Linstrom, Eugene Linstrom, Virginia Stockland, Dale Linstrom; and parents-in-law Otto and Aida Wallin. In lieu of flowers, memorial donations can be made to Heart to Heart, St. Stephen Lutheran Church, a local hospice, or an organization of donor’s choosing.

The family of Phyllis Joan Wallin created this Life Tributes page to make it easy to share your memories.

Send flowers to the Wallin family.