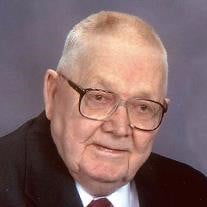 Ray Hively, age 95, of Marshall, Minnesota, passed away on Friday, January 20, 2017, at his Avera Morningside Heights Care Center in Marshall, with family at his side. Funeral Services are 11:00 AM Tuesday, January 24, 2017, at Cornerstone United Methodist Church in Marshall. Following a reception, interment will be in the Lynd City Cemetery. Visitation will be held 4:00 – 8:00 PM, Monday, January 23, 2017, at the Hamilton Funeral Home. A prayer service is scheduled for 7:00 PM. Visitation will continue one hour prior to the service, from 10:00 – 11:00 AM, on Tuesday at the church. Ray Allen Hively was born on February 24, 1921, in Russell, Minnesota. He was the son of Earl and May (Spear) Hively. Ray was baptized at the Methodist Church in Lynd. He grew up in Lyon Township and attended school through the eighth grade before helping his folks on the family farm. Ray entered active duty during World War II on August 27, 1942. He would go on to serve in the United States Army Air Corps overseas and achieve the rank of Sergeant. He was honorably discharged December 30, 1945, and returned home. During this time, he was married to Francis E. Williams on May 4, 1943. The couple were married for over 11 years and had 4 children, Leonard (who dies as an infant), Judy, Lester, and Dennis. Francis passed away January 1, 1955. On August 13, 1955, Ray was married to Evelyn C. Pagel at the Amiret Methodist Church. They shared over 61 years of marriage together and raised 6 children: Judy, Eugene, Lester, Dennis, Cynthia, and Michael. The couple moved around while farming in Southwest Minnesota until 1969. Ray then worked at Minneapolis Moline and later White Farm Equipment in Hopkins with engineering and mechanic work. He retired in 1982. The couple returned to live in Russell for 6 years and then a move to Marshall. When Ray needed more assistance with his daily care, he moved into Avera Morningside Heights Care Center in July of 2016. Ray was a proud life-member of the Marshall American Legion, DAV, and VFW. He served as an elder at Christ United Presbyterian Church, and was a current member of Cornerstone United Methodist Church in Marshall. His enjoyments in life included John Deere tractors, Hereford Cows, fishing, camping, playing cards, traveling, and spending time with family. He will be deeply missed. Ray passed away on Friday, January 20, 2017, in Marshall, Minnesota, at the age of 95 years, 10 months, and 27 days. Ray is survived by his wife, Evelyn Hively of Marshall; children, Judy (Max) Boltman of Maple Lake, Eugene “Gene” (Denise) Hively of Elk River, Lester (Cheryl) Hively of Minneota, Dennis (Jane) Hively of Chaska, Cynthia Hively of Marshall, Mike (Laurae) Hively of Lynd; 15 grandchildren; 21 great-grandchildren; 5 great-great-grandchildren; siblings, Alice Grey of Ruthven, IA, Helen (and Arnold) VanWinkle of Balaton; sister-in-law, Betty Hively of Fargo, ND; nephews, nieces, other relatives and friends. He was preceded in death by his parents, Earl and May Hively; first wife, Francis Hively; son, Leonard Earl Hively; and siblings, Gladys (Bob) Dayland, Clifford (Lois) Hively, and Lester Ralph “Bud” Hively.

Ray Hively, age 95, of Marshall, Minnesota, passed away on Friday, January 20, 2017, at his Avera Morningside Heights Care Center in Marshall, with family at his side. Funeral Services are 11:00 AM Tuesday, January 24, 2017, at Cornerstone... View Obituary & Service Information

The family of Ray Allen Hively created this Life Tributes page to make it easy to share your memories.

Ray Hively, age 95, of Marshall, Minnesota, passed away on Friday,...