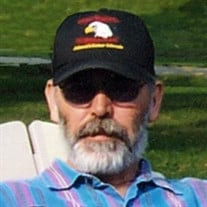 Raymond Root, age 68, of Marshall, Minnesota, died on Friday, December 3, 2021, at the Avera Marshall Regional Medical Center. Memorial Services will be at 1:00 p.m. Friday, December 10, 2021, at the Hamilton Funeral Home in Marshall, Minnesota. Attendees will then gather to remember Ray afterword, likely at Fuzzy’s in Marshall – more details coming soon. Visitation will be held one hour prior to the service, from 12:00 p.m. – 1:00 p.m., on Friday, December 10, also at the Hamilton Funeral Home. A note from the family: “We want to do our part to keep everyone safe and healthy. Masks will be required at the service - we will have extras on hand in the event you don’t have one. If you’re experiencing a fever and/or any Covid-related symptoms, please join us in Ray’s Celebration of Life virtually on the Tribute Wall of this page" (or by clicking here: https://www.hamiltonfh.com/obituaries/Ray-Root-2/#!/PhotosVideos/00000000-0000-0000-0000-000000000001/WebcastVideo) Raymond Leonard Root, Jr., was born on March 25, 1953, to parents Raymond, Sr., and Audrey (Oberg) Root in Spokane, Washington. The family moved around during Ray’s youth and split time between Washington and northern Minnesota as Ray Sr. followed his work as a logger. After attending a few years of high school Ray Jr. enlisted with the United States Marine Corp and served for two years stateside during the Vietnam War. Upon returning home, Ray worked construction in several states. A few years later, he and Sharon met in April 1980 at the Legion Bar when Sharon Verstraete simply approached and asked him to wear his hat while she danced with her girlfriends. Little did she know he’d spotted her months prior and already had a twinkle in his eye for her but was too shy to introduce himself. The rest is history, and they couldn’t wait to start their lives together as just a few months later – on July 19, 1980, they exchanged vows at her parents’ home in Ghent. The couple made their home in Marshall and shared 41 years of marriage together while raising their daughter, Stacy. In 1981, Ray began working at Schwan’s in Marshall and during his 20-year tenure, worked his way up to lead maintenance technician and supervisor at the ice cream plant. He proudly led his team for years keeping the plant operating smoothly. His next adventure was becoming a long-haul truck driver for Floyd Wild where he spent the next 10 years. He then returned to Schwan’s, applying his expert driving skills to continue delivering much-loved products to communities across the country. For the last 10 years, Ray enjoyed the solitude of his cab which afforded him the chance to follow his wanderlust experiencing the beauty of the United States one highway at a time. Ray was an incredibly hardworking man, mostly self-taught, quiet and independent, who loved to be out in the world and honed his skills while tackling any endeavor. He was very mechanically minded and loved cars and trucks, particularly his 1967 Mustang from years past and his Dodge Ram pickups from years present. He was a member of the Marshall American Legion and his enjoyments in life included spending time with his grand-dogs, playing Yahtzee and solitaire while waiting for loads, watching football (particularly the Vikings despite their record), baseball (especially the Twins), NASCAR, Gopher football and basketball, watching his grandkids grow up, playing billiards and cards, woodworking, and being involved in a good inside joke. Ray died with his loving wife Sharon and daughter Stacy by his side on Friday, December 3, 2021, at the Avera Marshall Regional Medical Center due to complications from Covid. His family lovingly pleads for everyone to get vaccinated. He reached the age of 68 years, 8 months, and 9 days. Blessed be his memory. Ray is survived by his wife, Sharon Root of Marshall; daughter, Stacy (and Jeff) Pagano of Excelsior; grandchildren, Nick and Isabelle Pagano of Excelsior; two grand-dogs, Jaz The Blind Wonder Dog and Josie, both beloved Shih Tzus; siblings, Geraldine Skelton of Carrollton, AL, Margie Dwire of Mountain Lake, Mary Giraldi of Gordo, AL, Joe (and Sandy) Root of Long Prairie, Scott Root of Russell, Janine Root of Marshall; many nephews, nieces, relatives and friends. He is preceded in death by his parents, Raymond Sr. and Audrey Root, parents-in-law Gerart and Margaret Verstraete, grandparents, aunts and uncles.

The family of Ray Leonard Root Jr. created this Life Tributes page to make it easy to share your memories.

Send flowers to the Root family.