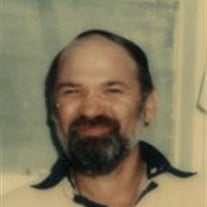 Russell: Raymond J. Bakker passed away at his residence in Russell on Friday, August 13, 2010. A memorial service will be held at 11:00 A.M. Saturday, August 21, 2010 at the Russell Community Center. Visitation will be one hour prior to the service. The Hamilton Funeral in charge of the arrangements. Condolences may be directed to www.hamiltonfh.com. Raymond John was born to Henry and Clara (Lens) Bakker on November 26, 1940 in Ruthton, Minnesota. He was baptized and confirmed in the Christian faith. He graduated from the Russell High School in 1958. He entered the United States Army in 1960 and served his country until his honorable discharge in 1964. On March 20, 1976, Ray was united in marriage to Evelyn Delamater in Minneapolis. Ray worked as a carpenter for Doom and Cuypers for many years. He also was a volunteer firefighter for the Russell Fire Department and active member of the Russell American Legion Post. He built and lettered the crosses for the Memorial Day services. His enjoyments in life were doing jigsaw puzzles and spending time with his family. Ray passed away at his home in Russell on Friday, August 13, 2010. He had reached the age of 69 years, 8 months and 15 days. He is survived by his wife, Evelyn of Russell; two children, Ray (Kazen) Hill of Gibbon and Jade Strong of Brooklyn Park; five grandchildren, Jarred, William, Benjamin, Raymond and Finnegan; six siblings, Theresa Laleman, Mary (Jules) DeSaer of Marshall, Charles (Sharon) Bakker of Ruthton, George (Audrey) Bakker of Marshall, Ellen (Frank) Brentine of Topeka, KS and Cecillia (Rod) Lipp of St. Louis Park; also many nieces and nephews. He was preceded in death by his parents; brother, James; and two sisters, Agnes and Betty. Ray was a very nice man and was well liked by everyone who got to know him. Blessed Be The Memory Of Ray Bakker

Russell: Raymond J. Bakker passed away at his residence in Russell on Friday, August 13, 2010. A memorial service will be held at 11:00 A.M. Saturday, August 21, 2010 at the Russell Community Center. Visitation will be one hour prior to the... View Obituary & Service Information

The family of Raymond John Bakker created this Life Tributes page to make it easy to share your memories.

Russell: Raymond J. Bakker passed away at his residence in Russell...

Send flowers to the Bakker family.