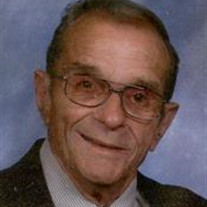 Marshall: Raymond R. Buesing, age 78, of Marshall, passed away at the Avera Marshall Regional Medical Center on Saturday, July 9, 2011. Funeral services will be 2:00 P.M. Wednesday, July 13th at First Lutheran Church. Burial will be in the Marshall Cemetery. Visitation will be one hour prior to the service at the church. Raymond Rudolf was born on December 15, 1932 to Herman and Christine (Wagner) Buesing in Marshall, Minnesota. He was baptized and confirmed at the First Lutheran Church and attended Marshall High School. He served in the United States Army. Ray worked for the Swift and Company until he retired. He enjoyed fishing playing Bingo and the slots. Ray passed away at the Avera Marshall Regional Medical Center on Saturday, July 9, 2011. He had reached the age of 78 years, 6 months and 25 days. He is survived by his brother, Eugene of Marshall; sister, Sharon (Kenny) St. Aubin of Marshall; seven nephews, Bruce Berre, Gary Nelson, Steve Nelson, Richard Nelson, Jeff Nelson, Doug Przymus, and Richard Buesing; six nieces, Becky Nelson, Jody Pronk, Colleen Przymus, Karen Herick, Linda Przymus and Cheryl Bittner; and brother-in-law, Harlan Nelson of Marshall. He was preceded in death by his parents; two sisters, Delores (Ray) Przymus and Marlys Nelson; and brother, Rolland Buesing. Ray was a faithful member of the First Lutheran Church at the time of his death. Blessed Be The Memory Of Raymond R. Buesing

The family of Raymond Rudolph Buesing created this Life Tributes page to make it easy to share your memories.

Send flowers to the Buesing family.