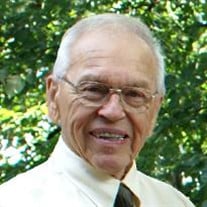 Ray Johnson, age 84, of Marshall, Minnesota, passed away on Monday, July 31, 2017, in Wisconsin, as the result of an aviation accident. Since Ray loved a good fly-in breakfast, Funeral Services are 10:00 a.m. Saturday, August 5, 2017, at the Southwest Minnesota Regional Airport – Ryan Field Marshall (KMML) in Marshall with a pancake breakfast to follow. Interment will be in the Marshall Cemetery, Marshall, Minnesota. Fellow pilots are invited to fly in to celebrate Rays life - airplane parking will be available. Visitation will be held from 4:00 – 8:00 p.m. Friday, August 4, 2017, at Living Word Lutheran Church in Marshall. A prayer service is scheduled for 7:00 p.m. Visitation will continue one hour prior to the service, from 9:00 – 10:00 a.m., on Saturday, at the Airport. In lieu of flowers, Memorials preferred to: First Responders - City of Oshkosh Fire Department; Mercy Medical Center - Oshkosh, WI; and Living Word Lutheran Church - Marshall, MN. Memorials received by the family will be directed similarly. Officiating: Rev. Kelly Wasberg Military Honors: Marshall American Legion, Post 113 Raymond Carlton Johnson, Jr. was born in New Ulm, Minnesota on Dec 28, 1932, to Raymond and Ruth (Habberstad) Johnson. He was baptized and confirmed at the Brighton Methodist Church and grew in faith to a young man on the family farm, “Home Acres” near Klossner, Minnesota. Eager to follow his older brothers in service to their country, Ray joined the Minnesota National Guard in 1949, even before graduating from New Ulm High School in 1950. He was activated in January 1951, and served during the Korean war in Korea. Ray was honorably discharged from the army in March of 1953. He headed to Minneapolis with a buddy to get a job and worked as an office machine repairman for several months. Growing weary of the city, he decided to rejoin his brothers and father in operation of the family farm. Shortly thereafter, he met the love of his life, Marlys Minnie Thormodson. They were united in marriage on June 23, 1956. Five children were born to them: Melanie, Melissa, Ross, Paul, and Peter. The couple shared over 61 years of marriage together. Ray initially farmed for 6 years and during that time he developed a passion for aviation, taking his first flying lesson in 1958. He bought his first airplane in 1958 and, in 1962, he moved his young and growing family to Tracy, Minnesota, where he established Tracy Air Service. While there, Ray and Marlys were active at Tracy Lutheran Church, raising their children in the faith and Ray served on the church council and other church capacities. In 1974, Ray and Marlys purchased the aviation business in Marshall, Minnesota, and established their life in Marshall where they currently reside. It was in Marshall that their aviation business, Midwest Aviation, flourished and evolved into larger operations. Ray’s business encompassed multiple areas of aviation: flight instruction - wherein he shared his passion and dedication to fledgling pilots, air charter, crop spraying, scheduled flight service, maintenance shop, airport base operator, and aircraft sales were all aspects of his business. Additionally, Ray was a designated FAA pilot examiner for over 46 years, certifying nearly 3000 pilots. Ray personally logged over 42,000 hours of flight time. After successfully operating and promoting aviation for 50 plus years, Ray was honored by being inducted into the Minnesota Aviation Hall of Fame in 2013. Ray and Marlys belong to, and are charter members of Living Word Lutheran Church in Marshall. Ray was a member of the American Legion, Veterans of Foreign Wars, Minnesota Trades Association, Minnesota Aerial Applicators Association, Minnesota Seaplane Pilots, Lake Amphibious Flyers Club, Aircraft Owners and Pilots Association, and Experimental Aircraft Association. Ray lived a faith-filled life with devotion to God and his family. He will be deeply missed by family and the large flying community he helped to foster. He is survived by his beloved wife, Marlys Johnson of Marshall; 5 children, Melanie Johnson (Ken Sporre) of St. James, Melissa (and Dave) Werpy of Miltona, Ross Johnson of Stillwater, Paul (and Jenell) Johnson of Dayton, Pete (and Lynne) Johnson of Lynd; 10 grandchildren, Tiffany (Lucas) Sandbo of St. James, Ashley (and Robert) Gohr of Mountain Lake, Seth Werpy of Miltona, Jonas (and Betsy) Werpy of Lino Lakes, Andrea (and Adam) Walstrom of St. Louis Park, Antonio Delfino of St. Paul, Jennifer Johnson of Dayton, Eric (and Lauren Stafne) Johnson of New Hope, Abby Johnson of Lynd, Natalie Johnson of Lynd; 9 great-grandchildren; brother, Merton Johnson of Mankato; nieces, nephews, other relatives, and many friends. He is preceded in death by his parents, Raymond and Ruth Johnson; and 4 siblings, Ruthie Johnson, Dorothy Gifford, Calvin Johnson, and Karen Gagen. He flies with angels now ... Blessed be his memory.

Ray Johnson, age 84, of Marshall, Minnesota, passed away on Monday, July 31, 2017, in Wisconsin, as the result of an aviation accident. Since Ray loved a good fly-in breakfast, Funeral Services are 10:00 a.m. Saturday, August 5, 2017, at the... View Obituary & Service Information

The family of Raymond Carlton Johnson Jr. created this Life Tributes page to make it easy to share your memories.

Ray Johnson, age 84, of Marshall, Minnesota, passed away on Monday,...