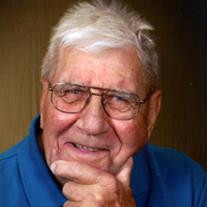 Raymond Sanow, age 89, of Marshall, Minnesota, passed away on Friday, April 15, 2016, at Avera Morningside Heights Care Center – Transitions Unit in Marshall. Funeral Services are 2:00 PM Friday, April 22, 2016, at Christ Evangelical Lutheran Church in Marshall. Following a luncheon, interment will be in the Zion Evangelical Lutheran Cemetery, Island Lake Township, Minnesota. Visitation will be from 4:00 – 7:00 PM Thursday, April 21, 2016, at the Hamilton Funeral Home in Marshall. Visitation will continue one hour prior to the service, from 1:00 – 2:00 PM, on Friday at the church. Clergy Officiating: Rev. Keith Schreiner Organist: Teri Knutson Congregational Hymns: 256 How Great Thou Art / 415 Be Still My Soul / 360 The Lord Is My Shepard, I’ll Not Want / 152 I Know That My Redeemer Lives Casket Bearers: Mitch Recker, Jared Sanow, Joe Sanow, Lemuel Boykin, Nathaniel Sanow, Garrett Sanow Raymond Sanow was born on September 24, 1926 in Iona, Minnesota. He was the son of Frank and Fanna (Aljets) Sanow. Ray was baptized October 4, 1940, and also confirmed at the Evangelical Lutheran Church in Chandler, Minnesota. He attended school there until 1941, when the family moved to Garvin. He continued school in District 56 and then went on to work on many area farms. On January 15, 1948, Ray was united in marriage to Ilene A. Klinker. The couple made their home in Balaton and later, Marshall. He worked for Thorsoen Construction and Marshall’s fur farm. Ray and Ilene started Raylene Furs in 1978 and he also drove truck for Marshall foods until 1997. He also worked for C and C Cleaners until his retirement in 2008. Ray and Ilene raised 6 children and shared over 54 years of marriage before Ilene died in 2002. Ray was an active member of Christ Evangelical Lutheran Church in Marshall. He will be remembered for his willingness to help people and his warm smile. Ray loved baking and gardening which he would share with his many family and friends. At Christmas, he enjoyed making his famous fudge and giving it away. Ray was called home to be with his Heavenly Father on Friday, April 15, 2016, in Marshall, Minnesota. He reached the age of 89 years, 6 months, and 22 days. Blessed be his memory. Ray is survived by his six children, Daniel (and Marilyn) Sanow of Idaho Falls, ID, Nancy (and Whit) Boykin of Yonges Island, SC, Ron (and Trish) Sanow of Woodland, CA, Marge (and Monty) Recker of Marshall, Russell (and Deidre) Sanow of Marshall, Charles (and Chris) Sanow of Marshall; 17 grandchildren; 22 great-grandchildren (and one on the way); brothers, Donnie (and Janice) Sanow of Minneota, Vern Sanow of Tracy; sisters, Sylvia (and Gary) Roberts of Marshall, Rosetta Woodbury of Crofton, NE; honorary daughter, Dawn Planting of Cottonwood; nieces, nephews, other relatives, and many friends. He was preceded in death by his wife, Ilene Sanow; parents, Frank and Fanna Sanow; and 10 siblings. The family invites attendees to a luncheon in the church basement immediately following the church service.

The family of Raymond Sanow created this Life Tributes page to make it easy to share your memories.

Raymond Sanow, age 89, of Marshall, Minnesota, passed away on...

Send flowers to the Sanow family.