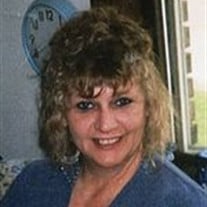 Rebecca “Becky” Fox, age 48, of Minneota, passed away at Prairie Home Hospice House in Marshall after a courageous battle with cancer on Saturday, August 11, 2007. Memorial services will be 2:00 P.M. Wednesday, August 15, 2007 at the Hamilton Funeral Home. Burial will be in the Trinity Lutheran Cemetery in Balaton. Visitation will be one hour prior to the service. Rebecca “Becky” Susan Fox was born to Donald N. Sr. and Mabel B. (Swanson) Fox on December 13, 1958 in Marshall. She graduated from Minneota High School in 1977. Becky was united in marriage to Kelly Adams. To this union a son; Brian was born. During her life, Becky had a variety of employers: baby-sitting (in her younger years), Best Western, Schwans, Schotts and also did electronic assembly in her home. Becky, like her mother Mabel, wrote poetry and composed music. Her other enjoyments were spending time with family, reading, writing, listening to a broad range of music from gospel to rock (especially Loverboy), and watching movies. Rebecca passed away at Prairie Home Hospice House in Marshall after a courageous battle with cancer on Saturday, August 11, 2007. She had reached the age of 48 years, 7 months and 29 days. She is survived by her three children, Brian Adams of Balaton, Lucci Fox of Canby and Brandi Fox of Ghent; Brian’s father, Kelly Adams of Minneota; father, Donald Sr of Minneota.; two sisters, Barbara (Jerry) Gould of Cottonwood and Judy (David) Holey of Marshall; also many nieces and nephews. She was preceded in death by her mother (in May 2007) and a brother, Donald Jr. Becky was baptized in Christ through the Assembly of God Church. She attended various churches throughout her life. She rededicated her life to Christ at Grace Life Church and was a member there at the time of her death. Blessed Be The Memory Of Rebecca Fox.

The family of Rebecca Fox created this Life Tributes page to make it easy to share your memories.

Rebecca “Becky” Fox, age 48, of Minneota, passed away at Prairie...

Send flowers to the Fox family.