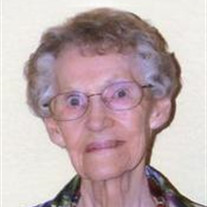 Regina Sorenson Marshall; Regina Sorenson, age 93, of Marshall, passed away on Wednesday, April 24, 2013 at the Westbrook Good Samaritan Center. Funeral services will be held on Saturday, April 27, 2013 at 11:00 a.m. at the Albright United Methodist Church in Marshall. Interment will take place in the Lynd Cemetery. Visitation will be held on Saturday beginning at 9:30 a.m. until the hour of the services at the church. Condolences can be sent to www. hamiltonfh.com Regina Rose Tholen, the daughter of Hubert and Bertha ( Goodman) Tholen was born on July 2, 1919 in Minneota, Minnesota. She was baptized and confirmed in the Christian faith. Regina attended and graduated from the Ivanhoe Public School. Regina married Ed Sorenson on January 24, 1940 in Marshall. They lived and raised their children in Lynd. They resided there until Ed entered the Minneota Nursing Home. Regina moved into the adjoining apartments until his death. Following Ed’s death she moved to Windsong Apartments in Marshall, where she resided until she was ninety. Due to failing health she was moved to Good Samaritan Nursing Home in Westbrook. Regina stayed home raising her family. When the last one was in school she entered the work force by sewing as a seamstress at Singer Sewing Center. After that Regina, worked at Super Valu, followed by Fab & Trim until she retired. Regina was a faithful member of the Lynd Methodist Church until she went to Marshall Albright Methodist Church when the Lynd church closed. She enjoyed doing many duties of the church and especially enjoyed being a member of the Good Cheer Group and then in Marshall the United Methodist Women. Regina enjoyed spending time with the love of her life Ed, her children, grandchildren and her family and friends. Her hobbies included sewing, playing cards and tending her beautiful Iris garden. Regina is survived by her seven children; Jim (Carol) Sorenson, Pat (Cheryl) Sorenson, Betty (Doug) Arndt, Elaine (Lyle) Arndt, Mary (Dennis) Lidtke, Marvin (Colleen) Sorenson and Dan (Judy) Sorenson, 22 grandchildren, 52 great-grandchildren, 16 great-great-grandchildren, brother; Lawrence (Adeline) Tholen, sister; Adeline Schulz, many nieces and nephews and numerous friends. She is preceded in death by her parents, her husband; Ed, brother; Andrew Tholen and sister; Mary Meulebrock and one great-great-grandson. Blessed be her memory. Funeral arrangements are by the Hamilton Funeral Home in Marshall. 507-532-2933

The family of Regina Sorenson created this Life Tributes page to make it easy to share your memories.

Send flowers to the Sorenson family.