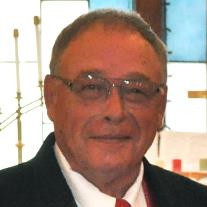 Richard “Rich” Lee Arndt, age 70, of Russell, passed away Sunday, December 10, 2017 at Avera McKennan Hospital in Sioux Falls, South Dakota. Memorial services are 2:00 p.m. Friday, December 15 at Grace First Parish in Russell. Visitation will be held Thursday, December 14, from 4:00 – 8:00 p.m. at the Hamilton Funeral Home in Marshall. A prayer service is scheduled for 7:00 p.m. at the funeral home. Visitation will continue one hour prior to the service, from 1:00 – 2:00 p.m. Friday at the church. Private interment will be held later. Richard Lee Arndt was born on October 1, 1947, in Marshall, Minnesota. He was the son of Rudolph and Bertha (Hill) Arndt. Rich was baptized at Opdal Lutheran Church in Florence, Minnesota, and later confirmed at Grace Lutheran Church in Russell, Minnesota. He graduated from Russell High School with the Class of 1965. Rich then worked on the family farm in Lyons Township with his parents. He was a member of the Army National Guard of Minnesota from 1966 until 1972 when he received his honorable discharge. In 1979, Rich, along with his parents, built the current home in Russell. On November 7, 1981, Rich was united in marriage to Maureen Sanderson at St. Peter’s Lutheran Church in Balaton, Minnesota. Rich and Maureen resided in Russell where Rich enjoyed hobby farming and he was also in the gravel business for many years. Rich was employed by Marshall Public Schools as a custodian for 24 years, retiring in 2004. The couple was blessed with three children: Scott, Brent, and Jessica, and they shared 36 years of marriage. Rich was a member of Grace First Parish in Russell, where he was a Sunday School teacher, served as the Church Council President two times, and was active in the Evangelical and Outreach teams. Rich was passionate about fishing, hunting, being outdoors and telling jokes and stories. One of his favorite past times was following Minnesota sporting teams, especially football. He was delighted to spend time with his grandchildren. Rich died on Sunday, December 10, 2017, at the age of 70 years, 2 months and 9 days. Blessed be his memory. Rich is survived by his wife, Maureen Arndt of Russell; two children, Jessica (Ben) Butzke of Marshall, Scott (Stacy) Sanderson of Brandon; four grandchildren, Carson Butzke of Marshall, Aaron (Nicole) Couch of Sartell, Heather Sanderson of Kensington, Allen (Katie) Sanderson of Osakis; brother, Larry (Marian) Arndt of Lake Benton; sister-in-law, Betty Arndt of Marshall; many nephews, nieces, other relatives and friends. Rich is preceded in death by his parents, Rudolph and Bertha Arndt; son, Brent Arndt; brother, Doug Arndt; father and mother-in-law, Selmer and Mae Sanderson.

The family of Richard Lee Arndt created this Life Tributes page to make it easy to share your memories.