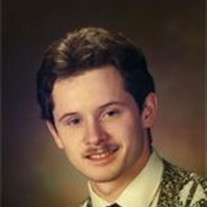 Marshall: Richard D. Breczinski, age 41, of Mankato, formerly of Marshall, passed away at the St. Joseph Hospital in Mankato on Tuesday, June 1, 2010. A celebration of Richard’s life will be 1:00 P.M. Friday, June 4th at St. Stephen Lutheran Church. Burial will be in the Calvary Cemetery. Visitation will be 4:00 P.M to 8:00 P.M. Thursday at the Hamilton Funeral Home. Visitation will continue at the church on Friday. Richard Douglas Breczinski was born to Alfred and Loretta (Evans) Breczinski on February 5, 1969 in Marshall. He was baptized, received First Communion and confirmed at St. Eloi Catholic Church in Ghent. He graduated from the Fulda High School and went on to enter the United States Army on November 15, 1990. He served a tour of duty in Desert Storm with the 4th Battalion 8th Army. Following his discharge on July 7, 1994, Richard became a truck driver. He picked up and delivered cars all over the midwest. Richard was married to Kim Roberts and to this union two children were born, namely, Cheyenne and Austin. The love of his life was his children and other activities he enjoyed were watching the Vikings, older style wrestling on TV, playing handheld video games with his children and playing cards. Richard passed away at St. Joseph Hospital in Mankato on Tuesday, June 1, 2010. He had reached the age of 41 years, 3 months and 26 days. He is survived by his mother, Loretta of Marshall; a brother, Dennis (and Val) Breczinski of Marshall; a sister, Jolene Breczinski of Marshall; three nephews, Brent, Derek and Donovan Breczinski; two nieces, Christina and Elizabeth Breczinski; sister-in-law, Linda Breczinski of Tyler; also many other relatives and friends. He was preceded in death by his father, Alfred; a brother, Ronald; and his maternal and paternal grandparents. Bless Be The Memory Of Richard Douglas Breczinski

The family of Richard Douglas Breczinski created this Life Tributes page to make it easy to share your memories.

Send flowers to the Breczinski family.