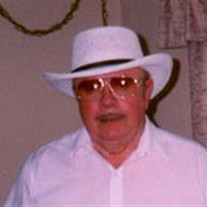 Marshall: Richard “Dick” E. Gottskalkson, age 78, of Marshall, formerly of rural Porter, passed away at the Minnesota Veterans Home in Luverne on Sunday, March 18, 2012. Funeral services will be 10:30 A.M. Wednesday, March 21st at the Hamilton Funeral Home. Burial will be in the Icelandic Cemetery near Ivanhoe. Visitation will be one hour prior to the service. Richard “Dick” Earl was born to Baldur and Alice (Halvorson) Gottskalkson on April 3, 1933 in Alta Vista Township, Lincoln County. He was baptized and confirmed at St. Paul’s Lutheran Church in Minneota. After graduating from Minneota High School attend Vocational Technical School at Granite Falls for mechanics Richard enlisted in the Army on September 21, 1953 and served in the Korean War. On August 15, 1956, Dick was united in marriage to Ina Mae Haunco in Lawton, Oklahoma. After his honorable discharge on September 21, 1956 the couple moved to Minnesota and farmed for several years in Alta Vista Township. He also managed the Produce Station in Porter for Woodlake Marketing Co-op. Dick went on to graduate from mechanic school in Canby and was hired by McLaughlin and Schultz Road Construction for ten years. Ina died July 10, 1972 at St. Mary’s Hospital in Rochester. When Dick retired, he did part-time mechanic work, Special Education at Marshall High School for four years and worked for Ted Deutz for three years. Dick passed away Sunday, March 18, 2012 at the Minnesota Veterans Home in Lurverne. He had reached the age of 78 years, 11 months and 15 days. He is survived by special friend, Phyllis Picht, of Granite Falls and other friends, Hank and Arlene Jerzak, Tom and Becky Noyes, Ron and Brenda Meulebroeck; also many other relatives and friends He was preceded in death by his wife, parents, and one brother, Ronald. Dick’s enjoyments included fishing and being mechanical. He was a member of Marshall American Legion Post #113. Blessed be the memory of Richard “Dick” Earl Gottskalkson.

The family of Richard Earl Gottskalkson created this Life Tributes page to make it easy to share your memories.

Send flowers to the Gottskalkson family.