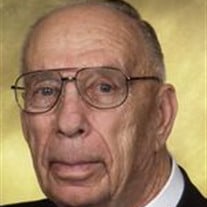 Marshall: Richard E. Holten, age 81, of Marshall, formerly of rural Dennison, passed away at the Avera Morningside Heights Care Center in Marshall on Friday, December 10, 2010. Celebration of life will be 1:30 P.M. Saturday, January 8, 2010 at the First Lutheran Church in Marshall. Burial will be Wednesday, January 12th at 11:30A.M. in the Meadow Ridge Cemetery in Faribault. Visitation will be one hour prior to the service. Richard Edwin was born to Edwin and Dorothy (Schrader) Holten on February 9, 1929 in Willmar, Minnesota. He was baptized and confirmed at Trinity Lutheran Church in Northfield. He graduated from Faribault High School and went on to attend the University of MN School of Agriculture. On September 14, 1950, Richard was united in marriage to Lois Bultman at St. Johns Church in Wheeling Township. They farmed near Northfield for three years and then purchased a farm near Dennison in 1954. They raised dairy cattle, other livestock and grain. They retired from farming in 1994 and moved to Marshall in 2001. Richard was a faithful member of the Dennison Lutheran Church, charter member of the Dennison Lions Club and served on the Northfield Retirement Center Board of Directors for 15 years. The loves of his life were his family and farming (especially at harvest time). His other enjoyments were wintering in Mesa, AZ, playing cards and fishing. Richard passed away at the Avera Morningside Heights Care Center in Marshall on Friday, December 10, 2010. He had reached the age of 81 years, 10 months and 1 days. He is survived by his wife, Lois of Marshall; two daughters, Joyce (Larry) Lane of Kilgore, TX and Jennifer (Mike) Thomsen of Lynd; four grandchildren, Richard (Crystal) Lane, Kevin Lane, Shelbie Thomsen and Rachel Thomsen; two step great grandchildren, Alexie and Colton Vandiver; two sisters, Judith (Jim) Larsen of Oronoco, MN and Kathleen (Ken) Betzold of Farmington, MN; also many nieces and nephews. He was preceded in death by his parents; stepfather, Clarence Hess, daughter, Janet Holten; and brother, David Hess. He was a member of the First Lutheran Church in Marshall at the time of his death. Blessed be the memory of Richard E. Holten.

The family of Richard Edwin Holten created this Life Tributes page to make it easy to share your memories.

Send flowers to the Holten family.