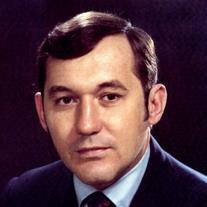 Richard “Dick” Johnson, age 80, of Marshall and formerly of Hendrum, Minnesota, died on Thursday, October 18, 2018, at the Divine Providence Nursing Home in Ivanhoe, Minnesota, under the care of Prairie Home Hospice. They worked together to keep Dick comfortable and his family is so grateful for their combined efforts. Memorial Celebration of Life is 2:00 p.m. Monday, November 12, 2018, at Christ United Presbyterian Church in Marshall, Minnesota. A reception will follow in the church basement. Interment will be in the spring of the 2019 in Immanuel Lutheran Cemetery, Hendrum, Minnesota. Visitation will be held one hour prior to the service, from 1:00 – 2:00 p.m., on Monday at the church. Richard Wayne Johnson was born on September 24, 1938, in Lisbon, North Dakota. He born to Gustav Arthur and Beulah (Putman) Johnson. Richard’s family lived in Gwinner, North Dakota, until the early 1940s when they moved to Hendrum, where Art purchased the local grocery store. Dick and his 6 siblings all contributed to the success of Johnson’s Fairway. Dick was very proud of his family’s accomplishments during some difficult years in the Red River Valley. The summer respite was a family cabin at South Twin Lake, fishing and more fishing. Dick was confirmed at Immanuel Lutheran Church where he also received his Eagle Scout award. His Hendrum High School class of 1956 remained friends for many years. He went on to earn his bachelor’s degree from Moorhead State College. Nearly 60 years ago, Dick met Ms. Marcia Efteland on a blind date. Lucky for Marcia, Dicky had an eye for redheads; the two were wed on November 27, 1959, at Immanuel Lutheran Church in Hendrum. The couple had 2 children, Erin Kelly and Eric Arthur. Through college, Dick worked at Siegel’s Men’s Clothing in Fargo, joining the Fargo Jaycees and formed a wedding photography business with his friend, George Grady, in the Fargo-Moorhead area. His determination and hard work as a young man help pay the bills and support his family. His first and only employment after college was with State Farm Insurance as an Auto Claims Specialist in Alexandria. 11 years later, he moved his family to Cottonwood when he was transferred to the Marshall Claims Office. He commuted to Montevideo, Appleton, and Ortonville areas. Dick spent 35 years working for State Farm Insurance, retiring on October 1, 1999. A special “thank you” to Sate Farm for the continuing education and support they gave Dick over his career, translating into retirement and now his family’s future. Dick was a member of Immanuel Lutheran Church in Hendrum, First Lutheran Church in Alexandria, Alexandria Rotary Club, and served as Past Master of the Masonic Constellation lodge #81 in Alexandria. Dick was also active in the Cottonwood Lions Club and sat on the Group Council for the benefit of local Boy Scout Troops. His other enjoyments in life included Native American history, games, Chess, crosswords, annual New Years’ trivia with friends, photography, handyman work, expanding his collections, and time spent with family. Richard died on Thursday, October 18, 2018, in Ivanhoe, Minnesota, at the age of 80 years and 24 days. He is survived by his wife of 59 years, Marcia Johnson of Marshall; children, Erin (and Don) Ball of Shell Rock, IA, Eric (and Kelly) Johnson of Moorhead; 3 grandchildren, Elise (13), Brooklyn (10), Sophia (9); sisters, Linda (and Ken) Weathers of Oscoda, MI, Barby Jo (and Rick) Hest of Eagle Bend; nephews, nieces, other relatives and friends. Dick was preceded in death by his parents, Arthur and Beulah Johnson; and siblings, Beverly (Francis) Dyrendahl, John (Carol) Johnson, Sharon (Gene) Arnold, and Myra (Duane) Johnson. The family specifically requests that no floral deliveries be made. In lieu, please donate to Prairie Home Hospice in Marshall, Alzheimer's research, the Boy Scouts in Marshall or Cottonwood or scout group of your choosing. Thank you.

The family of Richard Wayne Johnson created this Life Tributes page to make it easy to share your memories.

Richard “Dick” Johnson, age 80, of Marshall and formerly of Hendrum,...