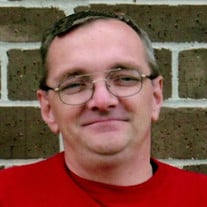 Richard Reesen, age 53, of Marshall, Minnesota, died on Friday, December 20, 2019, at the Avera Marshall Regional Medical Center in Marshall, Minnesota. Memorial services are 11:00 a.m. Friday, January 3, 2020, at the Hamilton Funeral Home in Marshall, Minnesota. A reception will follow. Private Interment will be at a later date in the St. Eloi Catholic Cemetery in Ghent, Minnesota. Visitation will be held one hour prior to the service on Friday, from 10:00 – 11:00 a.m., at the Hamilton Funeral Home in Marshall. Richard James Reesen was born on October 14, 1966, in Marshall, Minnesota, to parents Waldo and Joann (Dirckx) Reesen. He was baptized at St. Eloi Catholic Church in Ghent before his family moved to the Arlington/Green Isle area where he attended school. Richard was confirmed in his youth at St. Mary’s Catholic Church in Arlington where he graduated from the Arlington High School with the class of 1985. Richard went on to work various jobs including at Michael Foods in Gaylord and then the Bongards Creamery from 1993 – 2007. Richard needed a change in 2011, so he moved to Marshall and began work at Schwan’s and also spent a lot of time volunteering at the Avera Thrift Store. He was a good and loyal friend to many and enjoyed sharing a beverage with those close to him. He loved spending time outdoors, mowing the lawn, hiking, fishing, and going to the lakes. Richard Reesen died peacefully on December 20, 2019, in Marshall, Minnesota, at the age of 53 years, 2 months, and 6 days. Blessed be his memory. He is survived by his siblings, Raymond (and Jean) Reesen of Apple Valley, Mary Hector of Waconia, Robert Reesen of Chippewa Falls, WI; nieces and nephews, Andy Reesen, Abby (and Brandon) Reese, Brady (and Sarah) Hector, Adam Reesen, Carl (and Stevie Ann) Reesen; close friends, Carol Polfliet and Dennis Wild of Marshall; aunts, uncles, other relatives, and friends. Richard is preceded in death by his parents, Waldo and Joann Reesen, and several aunts and uncles.

The family of Richard James Reesen created this Life Tributes page to make it easy to share your memories.

Send flowers to the Reesen family.