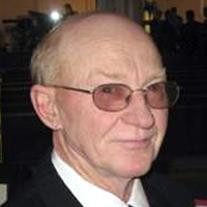 Richard “Rick” Rekedal, age 75, of Cottonwood, Minnesota, passed away on Tuesday, February 21, 2017, at the Prairie Home Hospice House in Marshall. Memorial services are 11:00 a.m. Monday, February 27, 2017, at Living Word Lutheran Church in Marshall. Following a reception, interment will be in the Christ Lutheran Cemetery in Cottonwood, Minnesota. Visitation will be held from 4:00 – 7:00 p.m., Sunday, February 26, 2017, at the Hamilton Funeral Home in Marshall. A prayer service is scheduled for 7:00 p.m. Visitation will continue one hour prior to the service, from 10:00 – 11:00 AM, on Monday at the church. Richard "Rick" Allan Rekedal was born on December 22, 1941 in Vesta, Minnesota. He was the oldest of five sons born to Ralph and Lorayne (Melling) Rekedal, and grew up on a farm near Cottonwood. Rick's father passed away when he was 14, after which Rick took on the role of helping to support his Mother; and he doted on her for the rest of her life. He attended school in Cottonwood through High School before joining the United States Air Force, serving as an Air Force Air Police at Wright-Patterson AFB in Dayton, Ohio. Rick served from September of 1960 until his Honorable Discharge on October 2, 1964. Rick spent a few years in Ohio before returning to Minnesota to farm and then run Rick's Electric in Cottonwood. On January 2, 1977, Rick was married to Charlotte Bottcher Pederson at Swan Lake Evangelical Free Church in Cottonwood. The couple made their home in Cottonwood and blended their families to include 4 children: Jaime, Leslie, Missy, and Susan. Rick spent the last thirteen years before retirement serving as the superintendent of grounds keeping at the Cottonwood Country Club. During that time, he also drove limousine for Martin White Knight Limo service, and was a favorite of customers for his spunk and wit. Rick retired in 2003 at the age of 62. Rick was very active in the Cottonwood community, having served as a commander and chaplain of the American Legion, president of the Lions Club, member of the Fire Department, president of the Ambulance, and sat for 8 years on the Cottonwood City Council. He was currently a member of Living Word Lutheran Church in Marshall. Rick was a generous and hardworking man. He enjoyed countless hours driving the links on his John Deere, and was passionate about golf. Many people may remember seeing him out on the course wearing his knickers and argyle socks. He also enjoyed hunting, snowmobiling, and water skiing; and many benefited from his green thumb and love of gardening. He enjoyed the annual lutefisk dinner, making his "real" potato lefse, drinking coffee and rolling dice at the local café, and sharing stories with friends. He loved to tell people that he was literally born in a chicken coop. More than anything, Rick loved being a Grandpa. His grandchildren fondly remember how Grandpa always had Dum-Dum suckers for them and their dogs every time he would visit. Richard passed away on Tuesday, February 21, 2017, at the Prairie Home Hospice House in Marshall, Minnesota, at the age of 75 years, 1 month, and 30 days. Rick is survived by his wife, Charlotte Rekedal of Cottonwood; children, Jaime (Rachel) Rekedal of Marshall, Leslie (Brian) Hart of Marshall, Missy (Tim) Ahlers of Watertown, SD, Susan (Lance) Withey of Round Rock, TX; 13 grandchildren, Spencer, Levi, and Logan Rekedal, Adam and Marah Hart, Mason, Sydney, and Regan Ahlers, Matthew, David, Dylan, Lena, and Courtland Withey; brothers, Bob (Lila) of Willmar, Dennis of Spicer, Steve (Bev) of White Bear Lake, Jerry of Eden Prairie; numerous nephews, nieces, other relatives and friends. He was preceded in death by his parents, Ralph and Lorayne Rekedal; parents-in-law, Arthur and Alice Bottcher; and many aunts and uncles. In lieu of flowers, memorials are preferred to Prairie Home Hospice in Marshall or to Alzheimer's research. The family invites attendees to the church basement for a reception following the memorial service.

The family of Richard "Rick" Rekedal created this Life Tributes page to make it easy to share your memories.

Send flowers to the Rekedal family.