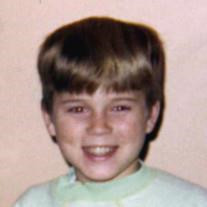 Ricky Lee Starnes, age 53, of Marshall, passed away unexpectedly on Tuesday, September 22, 2015, at his home in Marshall. Memorial services are Wednesday, September 30, 2015, 3:00 PM at the Hamilton Funeral Home in Marshall. Private family interment will be in the Tracy City Cemetery at a later date. Visitation will be held one hour prior to the service, from 2:00 – 3:00 PM, on Wednesday at the funeral chapel. Clergy Officiating: Rev. Bernie Wing Special Music: “On Eagle’s Wings,” “Abide With Me,” “Amazing Grace (My Chains Are Gone),” “Somewhere Over The Rainbow” Ricky Lee Starnes was born on November 12, 1961 in Marshall, Minnesota. He was the son of David and Carolyn (Culbersun) Starnes. Ricky grew up in Marshall and attended Marshall High School. He went on to serve briefly in the United States Army. Upon returning home to Marshall, Ricky worked several place in town. He lived in Marshall most of his life. His enjoyments in life included the great outdoors, bicycling, NASCAR, his independence and dreams of bow-hunting for deer. Ricky died on Tuesday, September 22, 2015, in Marshall, Minnesota at the age of 53 years, 10 months and 10 days. Blessed be his memory. Ricky is survived by his father, David (and Sonja) Starnes of Currie; mother, Carolyn (and Gene) Wheeler of Globe, AZ; brother, Jon Starnes of Montrose; step-siblings, Teri (and Brad) Hively of Balaton, Scott (and Jeri) Morris of Marshall, Kim (and Rob) Peterson of Walnut Grove, Robert “Bobby” (and Rhonda) Knauss of Panama City Beach, FL, Kurt (and Charissa) Knauss of Globe, AZ, Rob (and Sarah) Knauss of Council Bluffs, IA, Cherie (and Dennis) Hoffmann of Avoca, IA; nephews, nieces, other relatives and friends. He was preceded in death by his paternal grandparents, Luella and Everett Starnes, and maternal grandparents, Lynn “Speck” and Bernice Culbersun.

The family of Ricky Lee Starnes created this Life Tributes page to make it easy to share your memories.

Send flowers to the Starnes family.