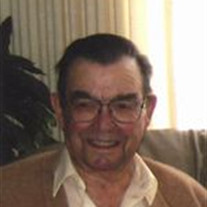 Riedar Sivertson, age 97, of Redwood Falls, formerly of Marshall, Belview, and Echo passed away on Sunday, January 6, 2008 at the Wood Dale Nursing Home in Redwood Falls. Funeral Services are scheduled for 1:00 PM on Thursday, January 10, at First Lutheran Church in Marshall. Visitation will be one hour prior to the service, at the church. Burial will be in the Marshall City Cemetery. Arrangements are with the Hamilton Funeral Home in Marshall. Riedar was born March 1, 1910 in Spokane, Washington, to Sivert and Agyda Sporstol. He grew up on the family farm near Orsta, Norway. He was baptized and confirmed in the Orsta Lutheran Church. He attended grade school and the local trade school in Orsta, where he learned blacksmithing, machine tool operation, and blue print drafting. After initially working with his father as a carpenter, he would later spend a winter with the fishing fleet. Riedar returned to the United States in 1928, and lived with his cousins near Echo. He worked on area farms for a while before working on road construction. in 1937, Riedar was united in marriage to Mildred Knutson of Rock valley Township in Maynard, Minnesota. When the war began, Riedar joined the Civilian Corp constructing the AlCan Highway. While there, he received his draft notice and returned to Minnesota, but failed his physical. He went on to work for Northern Ordinance, a defense plant, in Minneapolis until the war’s conclusion. Their son, Jerome, was born in 1944. Shortly thereafter, they moved to Belview where Riedar had purchased a Blacksmith Shop. Their daughter JoAnn was born in 1951. In 1958, the family moved to Marshall, where Riedar worked as a welder, machinist, and heavy equipment mechanic for Rund Equipment Repair, which later became the Marshall branch of Zeigler Caterpillar Sales and Service. Riedar retired from Zeigler’s in 1975. Riedar and Mildred joined First English Lutheran Church of Marshall in 1958. Riedar served on the church council and was active in church activities for many years. Riedar enjoyed hunting, fishing, woodworking, and traveling. He was a folk painter and woodcarver. He learned to use the computer and like to keep in touch with family via email. He liked spending time with his grandchildren and great-grandson. Riedar and Mildred moved to Garnett Gardens in Redwood Falls in 2005. Riedar in survived by his wife, Mildred; son, Jerome; daughter, JoAnn (and Dean) Bloemke; grandchildren, Roman (and Angela) Bloemke and Sarah Bloemke; great-grandchild, Cameron Bloemke; and siblings, Gunnar Sporstol of Orsta, Norway, and Ingebjorg Sporstol of Mjolkeraen, Norway. He was preceded in death by his parents, Sivert and Agyda Sporstol; sister, Evelyn; and brothers, Einar, Olav, and Siggurd Sporstol. Blessed be the Memory of Riedar Sivertson.

Riedar Sivertson, age 97, of Redwood Falls, formerly of Marshall, Belview, and Echo passed away on Sunday, January 6, 2008 at the Wood Dale Nursing Home in Redwood Falls. Funeral Services are scheduled for 1:00 PM on Thursday, January 10, at... View Obituary & Service Information

The family of Riedar Sivertson created this Life Tributes page to make it easy to share your memories.

Send flowers to the Sivertson family.