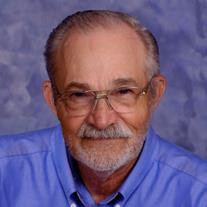 Robert Javens, age 86, of Cottonwood, Minnesota, died on Thursday, September 12, 2019, at Fieldcrest Assisted Living in Cottonwood, Minnesota. Memorial Services will be at 11:00 a.m. Monday, September 16, 2019, at the Swan Lake Evangelical Free Church in Cottonwood, Minnesota. Interment will follow in the Cottonwood City Cemetery. Visitation will be held from 5:00 – 8:00 p.m. Sunday, September 15, 2019, at the Hamilton Funeral Home in Marshall. Visitation will continue one hour prior to the service, from 10:00 – 11:00 a.m., on Monday at the church in Cottonwood. Robert Frank Javens was born on August 26, 1933, in Cottonwood, Minnesota, to Lester and Mary (Christensen) Javens. He attended country school before graduating with the Cottonwood High School, class of 1951. Bob was proud to then serve his country in the United States Army during the Korean War. Upon returning home, he helped his folks on the family farm and began driving truck. On February 8, 1964, Bob was united in marriage to Patricia Ehlenz in Mankato, Minnesota. The couple made their home in Cottonwood and had three boys, Todd, Travis, and Troy. The couple shared over 47 years of marriage together before Pat died in December of 2011. Bob owned and operated the Gulf Oil Service Station in Marshall before joining his friend at Norm’s Plumbing and Heating. He eventually settled in with the County Highway Department and drove for them and did maintenance until his retirement in 1997. Bob was proud to be a member of the former Presbyterian Church in Cottonwood, the Cottonwood American Legion, American Trap Shooters Association, Cottonwood Fire Department and Ambulance, and he was a life-time NRA member. Bob’s other enjoyments in life included hunting, fishing, keeping bees, racing pigeons, shooting trap, and reading. Robert Javens passed away in Cottonwood, Minnesota, on September 12, 2019, just 17 days after his 86th birthday. Blessed be his memory. Bob is survived by his sons, Todd (and Lynn) Javens of North Mankato, Travis (and Emily) of Mankato; 3 grandchildren, Landon Javens, Eaden Javens, Kendra Javens; siblings, David (and Shirley) Javens of Cottonwood, Mary Jo (and Ed) Horsmann of Grand Rapids, Emma Jean (and Alan) Hendricks of Kirkland, WA; nieces, nephews, other relatives and many friends. Preceding him in death were his parents, Lester and Mary Javens; wife, Pat Javens; and a son, Troy Javens.

The family of Robert "Bob" Frank Javens created this Life Tributes page to make it easy to share your memories.