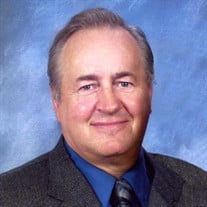 Robert Madetzke, age 76, of Marshall, Minnesota, died peacefully on Wednesday, July 8, 2020, at Morningside Heights Care Center in Marshall. Funeral services are 11:30 a.m. Saturday, July 11, 2020, at the Zion Evangelical Lutheran Church in Island Lake Township, Minnesota. Interment will follow at the Zion Evangelical Lutheran Cemetery. Visitation will be held from 6:00 – 8:00 p.m., Friday, July 10, at the Hamilton Funeral Home in Marshall, Minnesota. A Prayer Service is scheduled for 7:00 p.m. Visitation will then continue one hour prior to the service, from 10:30 – 11:30 a.m., on Saturday, July 11, 2020, at the church. Pandemic guidelines and social distancing will be observed throughout all services. Robert “Bob” Gary Madetzke’s life in his own words: “I was born at a very early age on July 20, 1943 to Louis Fred and Judith Geneva (Lee) Madetzke on the family farm in Moody County, South Dakota. Pastor Anderson baptized me at home because I caught a cold after the midwife gave me my first bath in front of an open window. The highlight of my early life was my confirmation by Pastor Hastad in the Jasper Evangelical Lutheran Church. I thought it was phenomenal that communion records were kept forever. “I attended Quissel grade school, the same country school my father attended, and the Jasper High School. I worked for farmers in the area and then entered the United States Army, January 1, 1964. I was stationed at Fort Leonard Wood, Missouri, Fort Gordon, Georgia, and Fort Wainwright, Anchorage, Alaska. “On April 1, 1970, I joined the Marshall, Minnesota, Police Department. Two years later, I trained K-9 Rex through the Minneapolis Police Department. Rex was a loyal partner and a beloved family pet. “After watching 'The Sound of Music' with my mother, I decided to ask teacher, Trudy Laper, to the Pat Boone Show with me at the Lyon County Fair. Her father married us at Peace Evangelical Lutheran Church, Sun Prairie, Wisconsin, on June 21, 1975. “Our marriage was blessed with five wonderful children and three delightful grandchildren.” Robert retired from the Police Department in 1988 due to health concerns. He had trained many pet dogs and their owners and was instrumental in getting a modern pound built in Marshall. Bob was a faithful member of Zion Evangelical Lutheran Church and enjoyed attending Bible classes both at church and Boulder Estates. He took flight instruction in Marshall got his pilot’s license. Anything to do with airplanes peaked Bob’s interest - particularly attending the Experimental Aircraft Association fly-ins at Oshkosh, Wisconsin, and a hot air balloon ride were aviation highlights. He loved country drives “to check out the crops” and was really a farm boy at heart. Bob’s most cherished slice of life was his family. He loved to spend time with his children and grandchildren. He and Trudy enjoyed 45 loving years of marriage. They will miss him deeply. Robert Madetzke died on July 8, 2020, in Marshall, Minnesota, at the age of 76 years, 11 months, and 18 days. Blessed be his memory. He is survived by his wife Trudy Joan (Laper) Madetzke of Marshall; children, Matthew Madetzke of Sioux Falls, SD, Sarah (Jonathon) Floerke of Phoenix, AZ, John Madetzke of Sioux Falls, SD, Karl (Paula) Madetzke of Bloomington, IN, Laura (Jeremy) Cole of Lake Crystal; grandchildren, Acacia and Brayden Floerke, Maria Cole; sisters, Lorna Muchow, Marilyn (Jim) Robertson, Janet Natwick all of Sioux Falls, SD; brothers, Willis “Bill” Madetzke of Jasper, Louis “Lee” (Diane) Madetzke of Bloomington, Roger (Pat) Madetzke of Pipestone; sisters-in-law, Lorie (Jeff) Judson of Pasedena CA, Jenny Laper of Graton, CA, Priscilla Vilhauer of Sierra Vista, AZ, Bonita Sullivan of Madison, WI, Victoria (Doug) Clemann of Eau Claire, WI; brother-in-law, Nicholas (Kerry) Laper of Ukraine; aunt, Alice Dunn of Redfield, SD; many nieces, nephews, other relatives and many friends. Robert is preceded in death by his parents, Louis and Judith Madetzke, brothers-in-law, Paul Natwick and Dick Muchow. “For the wages of sin is death, but the gift of God is eternal life in Christ Jesus our Lord.” ~ Romans 6:23

The family of Robert "Bob" Gary Madetzke created this Life Tributes page to make it easy to share your memories.

Send flowers to the Madetzke family.