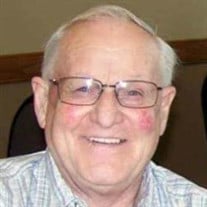 Robert “Butch” Gould, age 75, of Marshall, Minnesota, died on Sunday, September 20, 2020, at the Avera Marshall Regional Medical Center. A Memorial Gathering of Family and Friends will be held from Noon – 2:00 p.m. on Saturday, October 3, 2020, at the Justice Park in Marshall. Occupancy limits and social distancing must be observed throughout all services. Robert Wayne Gould was born to the late Henry and Mary (Purier) Gould on October 14, 1944 in Grand Rapids, Minnesota. He was born and raised in the Grand Rapids/Cohasset area. Butch was baptized and confirmed in the Lutheran Faith. He attended Cohasset schools. After school, Butch started farming. After a few years of farming, he started his career in heavy equipment. On May 23, 1964, Butch was united in marriage to JoAnn Hellvig in Marshall. To this union, 3 children were born, Bob, Brian, and Vickie. In the early years of being married, the couple moved around following jobs quite often, but always found their way back to Marshall to have their children. In 1968, Butch and JoAnn moved back to Marshall, where they have resided ever since. Throughout his career with heavy equipment, Butch worked numerous jobs and helped with a lot of big projects, one being the building of Southwest Minnesota State University. He worked for Becker Iron for 17 years. In his free time, Butch enjoyed spending time with his family, and having many discussions over McDonald’s coffee. Robert Wayne Gould passed away on Sunday, September 20, 2020 at Avera Marshall Regional Medical Center. He reached the age of 75 years, 11 months, and 6 days. Blessed be his memory. He is survived by his wife, JoAnn Gould of Marshall; children, Bob (Cammy) Gould of Marshall, Brian (Sue) Gould of Brooklyn Park, Vickie (Damon) Johnson of Marshall; 9 grandchildren, Cody, Bobby (Mariah), Shelby (Adam), Jessica, Troy, Tiffany (Jason), Alexis, Paige, Logan; many great-grandchildren; step-brother, Art (Sadie) Milner of Cottonwood; special cousin, Harvey Schultz of Cohasset; many nieces, nephews, other relatives, and friends. Butch is preceded in death by his parents; 5 brothers; and 3 sisters.

The family of Robert "Butch" Wayne Gould created this Life Tributes page to make it easy to share your memories.

Send flowers to the Gould family.