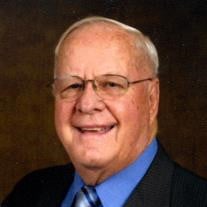 Robert Galbraith, age 88, of Balaton, Minnesota, passed away on Saturday, December 10, 2016, at Avera Morningside Heights Care Center in Marshall. Funeral Services are 10:00 AM Wednesday, December 14, 2016, at the Ralco Technology Campus (old High School building) in Balaton. Interment will follow in the Lakeside Cemetery, Balaton. A reception will then be held at the Balaton Community Center. Visitation will be held from 4:00 – 8:00 PM Tuesday, December 13, 2016, at the Agape Fellowship Church in Marshall. A prayer service is scheduled for 7:00 PM. Visitation will continue one hour prior to the service, from 9:00 – 10:00 AM, on Wednesday, at the Ralco Technology Campus in Balaton. Clergy Officiating: Rev. Ben Bryant, Rev. Jim Miller, Rev. Gary Bowden Organist: Colleen Engel Honorary Casket Bearers: Leon Neisius, Dick Jorgenson, Norm Gregerson, Bob Lockwood, Jim Thomasson, Willard Engel, Rueben Madsen, Scott Riddlemoser Active Casket Bearers: Bob’s grandsons ~ Doug Wing, Scott Nyhagen, Randy Nyhagen, Brian Knochenmus, Jeremy Nyhagen, Michael Galbraith Robert “Bob” Vernon Galbraith was born to William and Edna (Garrels) Galbraith on November 9, 1928 in Marshall, MN. Bob grew up in Balaton, MN and attended Balaton High School. He graduated from there with the class of 1948. Bob then married his high school sweetheart, Lou Braband, in 1948 at the Presbyterian Church in Balaton. They were married for 68 years. Bob was passionate about his faith in Jesus Christ and his family. Bob and Lou had 3 children. Linda (Allen) Nyhagen of New Auburn, WI; Lanita (Jon) Knochenmus of Lynd, MN; and Randy (Pam) Galbraith of Plymouth, MN. Second to his faith and family, was his passion for Agriculture. Following employment by MB Boch & Associates and the JR Watkins Co., Bob and Lou founded Ralco Nutrition in Marshall, MN in 1971. He retired from Ralco in 1990, and even then Ralco employees would often find Bob visiting all the different locations, giving a hug, offering a handshake, or sharing a smile. In his free time, he would drive for Lockwood Motors and was so grateful for Chet Lockwood and all the employees. Bob was very active in the Marshall community. Bob accomplished the rank of Eagle Scout. He was the Marshall Chamber of Commerce President in 1984-85. He also was on the original board of Hope Harbor (formally House of Hope). Bob was an avid MN Vikings fan, Marshall A’s and MN Twins baseball fan and he loved cars…especially Cadillacs! He had a way about him that would always make everyone around him feel special and welcome. He loved a good practical joke and loved to laugh. After battling leukemia, Bob died peacefully with his family surrounding him at the age of 88, 1 month, and 1 day. He is survived by his wife, his 3 children and their spouses, 9 grandchildren and 29 great grandchildren. He is preceded in death by his parents; siblings, Donna, Irene, Bill, and Orville. Bob will be greatly missed by family and friends, but he has left a legacy that will live forever. Blessed be his memory. In lieu of flowers, memorials preferred to Avera Hospice in Marshall (507-476-9432) or donor’s choice.

The family of Robert Vernon Galbraith created this Life Tributes page to make it easy to share your memories.

Send flowers to the Galbraith family.