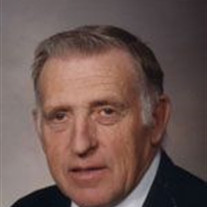 Marshall: Robert Lindsay, age 79, of Marshall, passed away on Wednesday, August 25, 2010 at the Avera Morningside Heights Care Center. Funeral services will be held on Tuesday, August 31, 2010 at 11:00 a.m. at the Albright United Methodist Church in Marshall. Interment will take place in the Marshall Cemetery. Visitation will be held on Monday, August 30th. From 4 to 8 p.m.with a 7 P.M. prayer service at Hamilton Funeral Home in Marshall and on Tuesday one hour prior to the service at the church. Robert Stanley Lindsay, the son of Thomas and Bertha (Blank) Lindsay was born on September 4, 1930 in Lyon County. He graduated from Marshall High School. After high school, Robert served in the U.S. Army. On May 15, 1952 he was united in marriage to Marian Drury at the United Methodist Church in Marshall. Robert was an electrician for over 40 years with the Bjerke Electric and T. Eric Enterprise doing lots of work at Schwan’s. Robert enjoyed spending time at the cabin at Pocket Lake fishing, watching the birds and having time with his family. He loved fishing, arrowhead hunting and especially restoring old Allis-Chamlers tractors. Robert was a 50 year member of Masonic Delta Lodge #119, a life member of the American Legion, very active at the Albright United Methodist Church where he served as a trustee. Robert had reached the age of 79 years, 11 months and 21 days at the time of his death in Marshall. Robert is survived by his four sons, Doug of Marshall, Arlyn (Peggy) of Marshall, Kevin (Mary) of Richmond, KY and Craig (Connie) Lindsay of Marshall; four grandchildren, Angela Sharpe, Randi, Anthony and Jacob Lindsay; his siblings, Gilbert Lindsay of Minneota, Arlen Johnson of Carlos, MN., Gerry (Jim) Calvin of Marshall and Leatrice Versluys of Brandon, SD; and other relatives. He was preceded in death by his wife, Marian on August 6, 2010; his parents; and his siblings, John Lindsay, Gertrude DeGroat, Margaret Nelson and Tom Lindsay. Memorials are preferred to the Parkinson Association.

The family of Robert Lindsay created this Life Tributes page to make it easy to share your memories.

Marshall: Robert Lindsay, age 79, of Marshall, passed away on...

Send flowers to the Lindsay family.