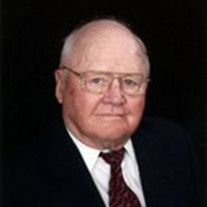 Robert Manke, age 86, longtime resident and civil leader of Marshall, passed away peacefully at Avera Marshall Regional Medical Center on Thursday, July 23, 2009. Funeral services are scheduled for 11:00 A.M. Monday, July 27, 2009 at St. Stephen Lutheran Church in Marshall. Burial will be in the Tracy City Cemetery. Visitation will be held on Sunday, July 26, from 5 – 7 P.M. with a 7:00 prayer service at the Hamilton Funeral Home in Marshall. Visitation will continue one hour prior to the service on Monday, at the church. Bob’s life was filled with faith, family, friends, and service to his community. Robert William Manke was born on January 2, 1923 in Tracy, Minnesota and was the only son of William and Bertha Manke. After graduating from Tracy High School, he served his country in the US Army. He landed on Omaha beach, saw action during the Battle of the Bulge, and in all five major military campaigns across Europe. He was a recipient of the Purple Heart. As a member of the Tracy Army National Guard, he was also called to service during the Korean Conflict. After WWII, Bob returned to Tracy and married his high school sweetheart, Delores Nelson. In their 63 years together, they worked tirelessly to build their family and their careers. In 1951, Bob and Delores moved to Marshall where Bob began his 41 year career at Olson and Lowe Men’s Clothing as a suit salesman. It was during this time that he served as president of the Marshall Country Club and as Chairman of the HUD Housing Authority that was instrumental in the building of the Parkview Apartments in Marshall. He had the distinct honor of serving as the President of two local churches; First English Lutheran and St. Stephen Lutheran Church. Bob was also a Sunday school teacher and Boy Scout leader. Bob’s greatest joy came from his family and friends. Delores was his best friend and the love of his life. He was the patriarch and spiritual leader to all of his children, grandchildren and great-grandchildren. He followed all of their activities and always offered words of wisdom and support. Bob and Delores attended countless football, baseball, basketball, tennis, and soccer games and saw to it that all of their children and grandchildren received college degrees. His contagious smile and witty sense of humor brightened the days of friends, co-workers, customers, and colleagues. Bob was an avid sportsman. In his 30’s and 40’s, golf was his passion. However, in 1973 after an accident confined him to a wheelchair, he stayed active in trap-shooting, woodworking, and fishing with friends. He is survived by his wife, Delores of Marshall; children, Merrilee (and John) Eberhart of Pine City, Robert P. (and Ginny) Manke of Sioux Falls, SD, Rick (and Shan) Manke of Detroit Lakes, and David (and Jo Ann) Manke of Eagan; sisters, Mildred Otto of Walnut Grove and Marjorie Peterson of Tracy; and many other relatives and friends. His legacy lives on in his 10 grandchildren and 10 great-grandchildren. The grandchildren are Becky (Eberhart) Boland, Angie Eberhart and Carrie (Eberhart) Sell; Will Manke, David Manke, and Erik Manke; Ryan Manke, Reed Manke, and Rory Manke and Melissa (Manke) Fimbres. His great-grandchildren are Brianna, Bryce, Brendan, and Brooke Boland; Parker, Addie and Ella Sell; Jacob and Noah Manke and Easton Manke. He was preceded in death by his parents, William and Bertha Manke. Please designate memorials to the Disabled American Veterans or the St. Stephen Lutheran Church in Marshall. Blessed be the memory of Robert Manke.

The family of Robert William Manke created this Life Tributes page to make it easy to share your memories.

Send flowers to the Manke family.