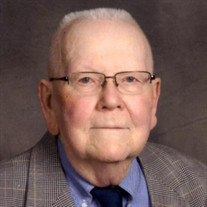 Robert Meffert, age 84, of Marshall, Minnesota, died peacefully on Monday, January 31, 2022, at his home in Marshall, Minnesota. Funeral Services are 11:00 a.m. on Monday, February 7, 2022, at Good Shepherd Lutheran Church in Marshall, Minnesota. Visitation will be held from 4:00 – 8:00 p.m. on Sunday, February 6, 2022, at the Hamilton Funeral Home in Marshall. A prayer service is scheduled for 7:00 p.m. Visitation will continue one hour prior to the service on Monday, from 10:00 a.m. until the time of services at 11:00 a.m., at the church. A Committal Service will be held at 11:00 a.m. on Tuesday, February 8, 2022, in the East Union Lutheran Church in rural Carver County Minnesota. Interment will immediately follow in the East Union Lutheran Cemetery. After the burial Tuesday, a reception for attendees will be offered at the East Union Fellowship Hall - just north of the Cemetery. Robert Lee Meffert was born August 12, 1937, in Arlington, Minnesota. He was one of four children born to Elmer and Luella (Maurer) Meffert. He grew up in Arlington, Henderson, and then Gaylord, Minnesota. Bob graduated from Gaylord High School in 1955 and graduated from Augsburg College in Minneapolis with degrees in music education and mathematics. It was during an Augsburg Choir tour that Bob took Mary Lundquist out on a casual date in New York City. Their relationship, founded in music continued for another 64 harmonious years. Bob and Mary were united in marriage on September 24, 1960, at East Union Lutheran Church in Carver, Minnesota. The couple moved around as Bob's teaching career moved from Edgerton (MN) to Boyceville (WI), the University of Minnesota - where he finished his education certificates, and then Milroy (MN). In 1967 the couple moved to Marshall where they raised their sons and became deeply involved over the past 55 years. Bob shaped many musical lives as the instrumental instructor the Marshall Middle School and held various other roles in his education and musical careers before his retirement in the spring of 2000. He was always active in the community serving with the City Band since 1967 (became Director in 1983), the Southwest Orchestra as both player and director, the Route 68 Big Band, the Marshall Area Men's Chorus, Boy Scouts Leader - with his children and grandchildren, and as a church choir director since 1953. Bob was a longtime member of Good Shepherd Lutheran Church in Marshall and was faithfully involved in many roles including congregation president. Many know of his civic commitments and devotion to his country. Bob was active with the Lyon County Republicans, serving many years as Chair, and was consistent in his pursuit of American values. His devotion and impact are reflected in his family, particularly his grandchildren. Bob's other enjoyments in life included woodworking, camping, traveling, fishing, and time spent playing the trombone and percussion instruments. Bob and Mary were fixtures at many Marshall Tiger sporting events and concerts, as their drive to support the school and community carried long into retirement. Robert Meffert went to his Heavenly home on January 31, 2022, at the age of 84 years, 5 months, and 19 days. Blessed be his memory. He is survived by his wife, Mary Meffert of Marshall; sons, Mark (and Carla) Meffert of Eagan and their son Michael; James (and Karrin) Meffert of Edina and their children Alex, Noah, Katy; siblings, Marge Meffert of Minneapolis, Roger Meffert of Gaylord, Rollie Meffert of Red Wing; brother-in-law, Ray Lundquist of Plymouth; cousins, nieces, nephews, other relatives and many friends. Bob was preceded in death by his parents, Elmer and Luella Meffert, and an infant brother and infant sister. In lieu of flowers, memorials are preferred to Prairie Home Hospice and Community Care in Marshall or to the City of Marshall – designated for the City Band. The family would like to extend a heart-felt thank you to the care and compassion they received from the entire staff at hospice.

The family of Robert Lee Meffert created this Life Tributes page to make it easy to share your memories.

Send flowers to the Meffert family.