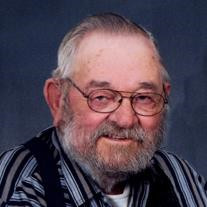 Robert Sando, age 82, of Marshall, Minnesota, passed away on Wednesday, May 15, 2019, at the Sioux Falls V.A. Medical Center in Sioux Falls, South Dakota. Funeral Services are 2:00 p.m. Saturday, May 18, 2019, at the Hamilton Funeral Home in Marshall, Minnesota. Following a reception, interment will be in the Marshall Cemetery. Visitation will be held one hour prior to the service on Saturday, May 18, from 1:00 p.m. – 2:00 p.m., at the Hamilton Funeral Home. Robert Dwayne Sando was born to Garfield and Judith (Johnson) Sando on January 21, 1937, in Hendricks, Minnesota. He was baptized and confirmed in the Lutheran faith while growing up the Astoria, White, and Toronto, South Dakota areas. He attended country school before graduating from the Astoria High School with the class of 1955. Bob worked setting telephone poles for a few years before serving in the United States Army from 1959 – 1961. Before being deployed to Germany, Bob was united in marriage to Nancy Seiler in Baltimore, Maryland. Upon returning home, the couple made their home on Nancy’s family farm outside Marshall – where they still live today. Bob and Nancy raised 5 children: Lori, Robert, Judith, Susan, and Thomas. Bob did some surveying for a local county engineer, worked at East River Electric for 17 years, and did some hobby farming. He was a member of Albright United Methodist Church (now Cornerstone) in Marshall and was faithful at making his morning coffee at McDonalds. Bob is remembered to have a hat on his head, a twinkle in his eye, and the ever sarcastic and quick-witted jokester. Robert Sando died on May 15, 2019, in Sioux Falls, South Dakota, with family by his side. He had reached the age of 82 years, 3 months, and 24 days. Blessed be his memory. Bob is survived by his wife of 59 years, Nancy Sando of Marshall; 5 children, Lori (and Ken) Halvorson of Egan, SD, Rob (and Pam) Sando of Roseau, MN, Judy (and Brian) Nietfeld of Paynesville, MN, Sue (and Ed) Thooft of Milroy, MN, Tom (and Julie) Sando of Marshall; 12 grandchildren, James (and Emily) Halvorson, Josh Halvorson, Jennifer (and Jon) Klaassen, Shane Sando, Carrie (and Bo) Sjoberg, Curt (and Christine) Nietfeld, Jessica (and Jake) Byrnes, Danielle Thooft, Ryan Thooft, Andrew Thooft, Jace Sando, Dillan Sando; 7 great-grandchildren; nieces, nephews, other relatives, and friends. Bob was preceded in death by his parents, Garfield and Judith Sando.

Robert Sando, age 82, of Marshall, Minnesota, passed away on Wednesday, May 15, 2019, at the Sioux Falls V.A. Medical Center in Sioux Falls, South Dakota. Funeral Services are 2:00 p.m. Saturday, May 18, 2019, at the Hamilton Funeral Home in... View Obituary & Service Information

The family of Robert Dwayne Sando created this Life Tributes page to make it easy to share your memories.

Robert Sando, age 82, of Marshall, Minnesota, passed away on...

Send flowers to the Sando family.