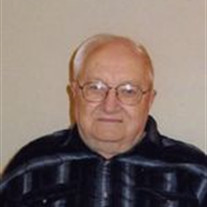 Marshall: Robert Simmons, age 89, of Springfield, passed away at St. John’s Lutheran Home on Sunday, December 6, 2009. Funeral services are scheduled for 10:30 A.M. Tuesday, December 8, 2009, at Wesley United Methodist Church in Marshall. Visitation will be held at the church one hour prior to the service. Burial will be in the Marshall Cemetery. Condolences may be submitted at www.hamiltonfh.com. Robert Fae Simmons was born August 29, 1920 at home in Clifton Township to Ray and Anna Simmons. He was baptized and confirmed in the Methodist Church. Robert graduated from Marshall High School in 1938 and went on for two years of agricultural schooling in Morris; he also attended Dunwoody College for Automotive Electronics. In 1942, Robert enlisted in the US Army, taking his basic training in Camp Rucker, Alabama. He was very proud that he was chosen for Ranger Training and was attached to the 81st Wildcat Division. He fought in the Islands of the South Pacific until his discharge in 1946. On September 7, 1946, Robert was united in marriage to Betty Lovrien in Vancouver, Washington. They farmed in Clifton Township until his retirement in 1987. He remained active on the farm, working as the neighborhood mechanic and also with his hydraulic jack repair business. Robert was a proud member of the American Legion – Milroy Post, First Responders, Milroy Lions, Masonic Lodge, and he was a life member of the DAV. Robert was a faithful member of Wesley United Methodist Church where he taught Sunday school for 24 years. He also served on nearly every church board. Robert’s other enjoyments in life included stained glass, building model tractors, playing cards, reading, and A&W root beer. Robert passed away on December 6, 2009 at the age of 89 years, 3 months, and 7 days. He is survived by his wife, Betty of Springfield; children, Roberta (and William) Borchert of Shoreview, L. Steve (and Carol) Simmons of Marshall, and Jane (and Paul) Nuytten of Sleepy Eye; 10 grandchildren, Laura (and Snoopy) Platz, Matthew (and Bobbie) Nuytten, Marcy Nuytten, Julie (and Tony) Steffen, Molly (and Mike) Boston, Michelle Simmons, Stacy (and Dennis) Mamer, Bon (and Shannon) Hill-Simmons, Charron (and Eric) Remme, and Kathy (and Brent) Knapper; 15 great-grandchildren; other relatives, and friends. Robert was preceded in death by his parents; brother, Lloyd Simmons; and twin sister, Betty Mae Camuffo.

The family of Robert Fae Simmons created this Life Tributes page to make it easy to share your memories.

Send flowers to the Simmons family.