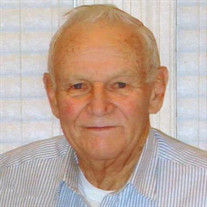 Robert Williams, age 89, of Marshall, Minnesota, passed away on Friday, January 7, 2022. Visitation will be held from 1:00 to 4:00 p.m. on Saturday, January 15, 2022, at the Hamilton Funeral Home in Marshall, Minnesota. There will be a Celebration of Life Service at 4:00 p.m. This service will include a time to share memories. In lieu of flowers, memorials are preferred to the American Cancer Society or donor’s choice. Robert Lee Williams was born on July 2, 1932 in Marshall, Minnesota. His parents were Kenneth and Helen (Mann) Williams. Growing up on the family farm near Amiret, Bob attended country school until the 8th grade. Due to his father’s declining health, Bob needed to stay home and help on the family farm. During those years, he also worked many part-time jobs. Bob was united in marriage to Evonne Sorensen on November 28, 1964 at Danebod Lutheran Church in Tyler, Minnesota. The couple made their home in Amiret. During this time, they were blessed with their two children, Mike and Nikki. In 1973, the family moved to Marshall and in 2000 they built their dream home on Lake Hendricks, Minnesota. They enjoyed lake life for 15 years before retiring back to Marshall. Over the years Bob was employed by Dwire, Inc., Ralco, Midwest Contracting and D & G Excavating. Being a blade operator was his pride and joy. Even after “retiring” Bob continued to operate a blade until the age of 85 years young. As Bob would always say “gotta go to work” and get it done. Bob was so very proud to teach the art of blading a road to his son and grandsons who followed in his footsteps. The challenge of a good pool game would put a twinkle in Bob’s eye. Before he was tall enough to see over the table, he was learning the game of pool. His competitive spirit led Bob to join a pool league and play on several teams. He was one of the best at the game. Bob’s other enjoyments included fishing, hunting, fast pitch softball, stock car racing and he loved playing cards and other games. His greatest enjoyment was spending time with his 2 grandsons. Bob had such a knack of telling stories that made people laugh. He always had a wisecrack or great comeback. His quick wit will always be remembered. Bob Williams passed away on Friday, January 7, 2022 in Marshall, Minnesota. He reached the age of 89 years, 6 months and 5 days. Blessed be his memory. Bob is survived by his wife Evonne of Marshall, son, Michael (Michelle) Williams of Lynd and daughter Cindy Friesen (Jim Buysse) of Tracy, Minnesota; son in law RJ Myers of Seffner, Florida; 2 grandchildren, Mason Williams (Hallie Lingen) of Tracy and Myles Williams of Lynd; brother Don Williams (Cheryl Bellmann) of Gainsville, Georgia and many other relatives and friends. Bob was preceded in death by his parents, Kenneth and Helen Williams and his daughter, Nicole Myers.

The family of Robert Lee Williams created this Life Tributes page to make it easy to share your memories.