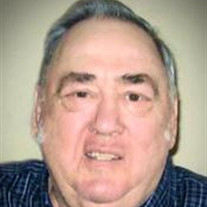 Marshall: Rodger C. Burgess, age 78 of Marshall, passed away at Avera Morningside Heights Care Center on Friday, October 4, 2013. Funeral services will be 10:30 A.M. Wednesday, October 9th at First Lutheran Church. Visitation will be 5:30 P.M. to 7:30 P.M. Tuesday at Hamilton Funeral Home and continue at the church on Wednesday, one hour prior to the service. Roger Rodger Charles Burgess was born on July 29, 1935 in Chippewa County to Robert L. and Lorraine (Levitz) Burgess. He was baptized and confirmed at St. John’s Lutheran Church near his parents’ home in Chippewa County. He graduated in 1952 from the Benson High School. In 1955, Rodger entered the United States Army and served his country as a Military Police Officer until his honorable discharge in 1957. On September 13, 1958, Rodger was united in marriage to Beverly Teichert at the Havelock Lutheran Church. To this union three children were born, namely, Rick, Tim and Bonna. Rodger worked for the U.S. Postal Service for 37 years and retired as a rural mail carrier in 1990. The love of his life was spending time with his family, especially his grandkids. He loved “the lake” which was Lobster Lake by Alexandria. He was an avid hunter, fisherman, outdoors man and enjoyed playing cards. He is survived by his wife, Beverly of Marshall; his children, Rick (and Becky)Burgess of Fargo, ND, Tim (and Eileen)Burgess of Danvers, MN and Bonna (and Bill) Fischer of Marshall; four grandchildren, Jennifer Burgess of Las Vegas, NV and Daniel Burgess of Fargo, ND, Zach Fischer and Sam Fischer of Marshall; and a sister, Lois Burgess of Alamo, TX. He was preceded in death by his parents and a brother, Dean Burgess. Bless be the memory of Rodger Charles Burgess.

The family of Rodger Charles Burgess created this Life Tributes page to make it easy to share your memories.

Send flowers to the Burgess family.