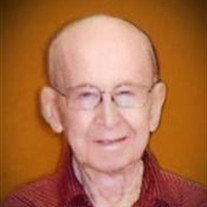 Marshall: Roger A. Anderson, age 92, of Marshall formerly of Milroy and Alexandria, passed away at the Prairie Home Hospice House on Saturday, August 25, 2012. Funeral services will be 10:30 A.M. Saturday, September 1st at St. Stephen Lutheran Church in Marshall. Visitation will be 4:00 P.M. to 8:00 P.M. with a 7:00 P.M. prayer service Friday at the Hamilton Funeral Home. Burial will be in Our Saviors Lutheran Cemetery in Milroy. Roger Alexander was born on April 9, 1920 in Watonwan County, Minnesota to Alexander and Edith (Newberg) Anderson. He was baptized on April 30, 1920 at the family farm and later confirmed on June 2, 1935 at West Sveadahl Evangelical Lutheran Church near St. James, where he joined the junior and senior choirs. He and his family moved to a farm east of Milroy in 1937 and the family joined Our Saviors Lutheran Church. Roger completed high school at Milroy, graduating in 1938, and was able to purchase his own farm in Westline Township in 1939. On February 15, 1947, Roger was united in marriage to Eloise M. Mitteness at Swift Falls Lutheran Church and they were blessed with three children; James, Duane and Lori. Roger and Eloise added land, built a new home and farmed until they retired and sold their farm in 1974. Roger and Eloise replaced the farm with land in Swift and Meeker Counties. Purchasing a home on Lake Mary near Alexandria, they resided there for 19 years, before moving and building a townhome on Lake Le HommeDieu. Roger obtained a Minnesota real estate license and sold real estate in the Alexandria area for 6 years. In 1978 he developed 80 acres of timberland into 50 residential lots he called “Carlos Timbers”. Roger was very active at Our Savior’s for their 33 years in Milroy. He was a faithful member of the senior choir, and the Men’s Quartet, who sang at many of the church funerals, other social events and area nursing homes. He taught Sunday School for many years and was also on the church board that built the present church. While residing in the Alexandria area, they joined Calvary Lutheran Church and Roger was active in the senior choir, church council, and many programs including evangelism committee, friendly visitor program and faithful member of the Men’s Bible Study group. Roger was also active in the community. In Milroy Roger served on various council boards including the Westline Township Board as supervisor and later chairman. In Alexandria he was on the Lake Le HommeDieu Association board as an advisor and chairman. Roger and Eloise both loved traveling and visited Europe numerous times, South America, the Caribbean Islands, Central America, Mexico, South Pacific including New Zealand and Australia, Alaska and nearly all of the United States. Roger and Eloise moved to Marshall in 1998 to be closer to family. Roger passed away at Prairie Home Hospice House on Saturday, August 25, 2012. He had reached the age of 92 years, 4 months and 16 days. He is survived by his wife, Eloise of Marshall; three children, Jim ( Karen) of Sioux Falls, SD, Duane ( Gail) of Marshall and Lori ( Jeff) Longworth of Osage; and six grandchildren, Court Anderson, Lindsay Anderson, Sarah (and Ian) Riley, Rachel (and Nick) Kerzman, and Jacob and Nicholas Longworth. Roger was preceded in death by his father on May 1, 1952, mother on November 29, 1968 and sister, Marian on November 18, 1998. One Roger’s favorite Bible verses was II Timothy 4:7 “I have fought the good fight, I have finished the race, I have kept the faith.” Blessed be the Memory of Roger A. Anderson

The family of Roger Alexander Anderson created this Life Tributes page to make it easy to share your memories.

Marshall: Roger A. Anderson, age 92, of Marshall formerly of...