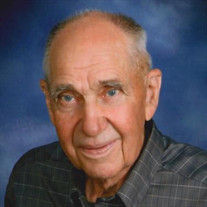 Roger Anderson, age 85, of Marshall, Minnesota, died on Wednesday, May 4, 2022, at his home with his wife at his side. Funeral Services are 11:00 a.m. Monday, May 9, 2022, at the Marshall Efree Church in Marshall, Minnesota. Interment will follow in the Marshall Cemetery. Visitation will be one hour prior to the service, from 10:00 – 11:00 a.m., Monday, May 9, 2022, at the church. Roger Ray Anderson was born on July 26, 1936, near Trimont, Minnesota, to parents Gus and Eva (Randall) Anderson. He grew up mainly in Trimont, but had some connections to Marshall and Lynd, Minnesota, in his youth. Roger was baptized and confirmed at First Lutheran Church in Trimont and, after a few years in country school near Lynd, graduated from Trimont High School with the class of 1954. He went on to serve his country in the United States Army, stationed in France from 1955 until 1957, when he returned home. It didn’t take him long to meet Ms. Delores Faber at a local dance. On September 12, 1958, Roger and Delores were united in marriage at the First Lutheran Church in Trimont. The couple made their home on his parent’s farm for the first 7 years. In 1966, they moved to rural Marshall and ran their own farm for years to come. The couple moved into Marshall in August of 2003 and spent 63 years together while raising their 2 sons. Roger was a life-long farmer and proud of his work. He spent hours in the field and on the yard caring for his piece of this Earth. He was proud to serve as treasurer of the Lyons Township Board and dealt seed corn for Dekalb for nearly a decade. Roger enjoyed spending his free time playing cards with family and friends. He was a long-time attendee of the Marshall Efree Church. Roger Anderson died with his wife at his side on Wednesday, May 4, 2022, at his home. He reached the age of 85 years, 8 months, and 8 days. He is survived by his devoted wife, Delores Anderson of Marshall; sons, Darin (and Shana) Anderson of Victoria, Jason (and Cindy) Anderson of Victoria; 5 grandchildren, Lucas Anderson, Jack Anderson, Lexi Anderson, Payton Anderson, Ethan Anderson; siblings, Dale (and Carol) Anderson of Marshall, Janet (and Kenny) Johnson of New Ulm, Joanne (and Brian) Hansen of Fairmont; sister-in-law, Betty Anderson of Trimont; nieces, nephews, other relatives and many friends. Preceding him in death were his parents, Gus and Eva Anderson, and brothers, Gary Anderson and Johnny Anderson.

Roger Anderson, age 85, of Marshall, Minnesota, died on Wednesday, May 4, 2022, at his home with his wife at his side. Funeral Services are 11:00 a.m. Monday, May 9, 2022, at the Marshall Efree Church in Marshall, Minnesota. Interment will follow... View Obituary & Service Information

The family of Roger Ray Anderson created this Life Tributes page to make it easy to share your memories.