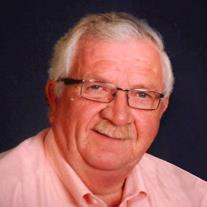 Roger Fragodt, age 66, of Cottonwood, formerly of Benson, Minnesota, died on Saturday, December 8, 2018, at his home in Cottonwood. Memorial Services are 11:00 a.m. Thursday, December 13, 2018, at the Swan Lake Evangelical Free Church in Cottonwood, Minnesota. Interment will follow in the Cottonwood City Cemetery. Visitation will be from 5:00 – 8:00 p.m. Wednesday, December 12, 2018, at the Hamilton Funeral Home in Marshall, Minnesota. A prayer service is scheduled for 7:00 p.m. Visitation will then continue one hour prior to the service, from 10:00 – 11:00 a.m., on Thursday at the church in Cottonwood. Roger Michael Fragodt was born on May 12, 1952, in Benson, Minnesota. He was the son of Ralph and Doris (Heimdahl) Fragodt. Roger was baptized and confirmed in the Lutheran faith and attended school in Benson. After graduating high school in 1970, he continued his education at the Technical College in Granite Falls, Minnesota. While going to school there, he met Ms. Jean Hirmer. On July 8, 1972, Roger and Jean were united in marriage at Christ Lutheran Church in Cottonwood. The couple made their home in Benson, where Roger worked as a salesman for a local plumbing and heating company. He also recently drove for parts delivery until his retirement in April of 2017. Roger and Jean shared over 46 years of marriage together and had 2 children, Jess and Josh. The couple had recently moved to Cottonwood to be closer to family. Roger served in the National Guards and was a member of the Masonic Lodge in Benson. He also served on the Benson Fire Department and Rescue Squad as a first responder for over 30 years. His enjoyments in life included spending time with his grandkids. He often sat at the counter in his home and would laugh out loud, just thinking about something one of his grandkids did. They were a continuing light in his life. He also enjoyed camping near Willmar and visiting with many friends made over the years, coffee and shaking dice at Sandy’s Café in Benson, and running into friends, old and new, to share jokes and laughter with them. He always thought of his family before himself and made sure they had everything they wanted before filling his own needs. He was continuously willing to lend a helping hand to anyone, for any need. He will be dearly missed. Roger died at home in Cottonwood on Saturday, December 8, 2018. He had reached the age of 66 years, 6 months, and 26 days. Roger is survived by his loving wife, Jean Fragodt of Cottonwood; children, Jess (Doug) Niznick of Burnsville, Josh (Katie) Fragodt of Cottonwood; three grandchildren, Brayden Niznick, Deklan Fragodt, Irelyn Fragodt; siblings, Ardis (Paul) Larson of Montevideo, Renae (Dave) Majeski of Stillwater, Randy (Connie) Fragodt of Milan, James (Sue) Fragodt of Benson, Jerome (Kelly) Fragodt of Montevideo; sisters-in-law, Joan (Terry) Davis of Marshall, Jill Jeseritz of Cottonwood; many nieces, nephews, other relatives and friends. He is preceded in death by his parents, Ralph and Doris Fragodt; sister and brother-in-law, Annette and Dan Meyer. Arrangements by the Hamilton Funeral Home in Marshall, Minnesota. 507-532-2933 Guest book and tribute wall available online at www.hamiltonfh.com.

The family of Roger Michael Fragodt created this Life Tributes page to make it easy to share your memories.

Send flowers to the Fragodt family.