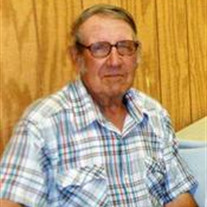 Marshall: Roger W. Gregg, age 85, of Marshall, passed away Monday, December 24, 2012 at the Good Samaritan Society Home in Pipestone. Celebration of Roger’s Life will be 2:00 P.M. Friday, December 28th at Christ United Presbyterian Church. Private burial will be in the Russell City Cemetery. Visitation will be one hour prior to the service. Roger was born March 4, 1927, to William and Ruella (Alleckson) Gregg in Island Lake Township near Taunton. Roger grew up in the Taunton area and graduated the eighth grade from the country school he attended. Roger moved with his family to the Marshall area, where he started working at Marshall Fruit Co. at the age of 15 driving truck. He entered the Army during World War II and spent most of his tour in Germany. He was honorably discharged in December of 1946. On October 1, 1949, Roger was married to Marilyn Rokeh at the Russell Presbyterian Church. To this union three children were born: Susan, Danny and Todd. Roger returned to Marshall Fruit and worked there until about 1975. December of 1972 he and his family moved to a farm south of Marshall where he farmed with his son Todd for 40 years. He loved to farm and raise cattle and other animals. After moving to the farm he worked for Ritter Sanitation until his retirement. Roger died Monday, Dec. 24, 2012, at the Good Samaritan Nursing Home in Pipestone. He had reached the age of 85 years, 9 months and 20 days. Roger is survived by his wife, Marilyn, of Marshall; daughter, Susan (and Dennis) Marks of Shakopee; sons, Danny (and Pam) of Prospect, Tenn., and Todd of Marshall; five grandchildren, Nathan (and Rebecca) Marks of Rosemount, Shanna (and Jeff) Klein, of Plymouth, and Micah, Kata and Simon Gregg, of Prospect, Tenn.; four great-grandchildren, Miriam and Aaron Marks, of Rosemount, and Melia and Laila Klein, of Plymouth; brothers, Clint (and Shirley) of Marshall and Ron (and Joyce) of Minneota; sisters, Doris Gruhot of San Diego, Calif., Alice Ann Reinhart of Windom and Marlys (and Harold) Carrow, of Pipestone; sister-in-law, Laurina (and Arlo) Gregg, of Marshall; and many nieces and nephews. Roger was preceded in death by his parents; brothers, Edwin, Arlo and Wallace. Roger was devoted to his family and was very proud of them all. He was a loving husband, father and grandfather and will be deeply missed. Blessed be the memory of Roger Gregg.

The family of Roger W. Gregg created this Life Tributes page to make it easy to share your memories.

Send flowers to the Gregg family.