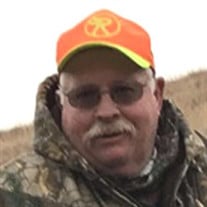 Roger Hook, age 61, of Russell, Minnesota, died on Monday, November 2, 2020, at the Avera Marshall Regional Medical Center. Private Memorial Services will take place Friday, November 6, 2020, at Grace First Parish in Russell. Interment will follow in the Russell Cemetery. A walk-through visitation, open to the public, will be held from 11:00 a.m. – 1:00 p.m. Friday, November 6, 2020, at Grace First Parish in Russell. Occupancy limits and social distancing must be observed throughout all services. Masks are currently required at all public indoor gatherings. In lieu of flowers, memorials are preferred to the Buffalo Ridge Chapter of Pheasant Forever (buffaloridgepf.com). Roger Lee Hook was born in Redwood Falls, Minnesota, on February 19, 1959, to Ronald and Delores (Kalass) Hook. He was baptized as an infant and later confirmed at First Evangelical Lutheran Church in Gary, South Dakota. Roger and his family spent most of his childhood in Gary and he graduated from Gary High School with the class of 1977. He then furthered his education at Pipestone Technical College. Roger was united in marriage to Brenda Brown in December of 1998 in Marshall. The family made their home in Russell. Roger worked several jobs and spent over 21 years at RH Sealcoating. He was proud to serve on the Russell Fire Department for 25 years and he also worked as a First Responder. Roger also held many offices in the town of Russell, serving as City Counselman, Grace First Parish Church Council member, Mayor, and he was on the board for Bandwagon Days. Roger was one who openly spoke his mind, and everyone knew he needed to get the last word. He did things his own way. Roger enjoyed spending time with his grandkids, hunting, fishing, dirt track racing, collecting guns, following sports, and all things Ford. Roger is survived by his wife, Brenda of Russell; children, Randy (Chrissy) Hook of Russell, Nicole (Matt) Heidecker of Tyler, Renee (Troy) Lehmann of Winthrop; 5 grandchildren, Aubrey Hook, Ripley Hook, Reese Hook, Maxxwell Lehmann, Ethan Lehmann; mother, Delores Hook of Marshall; siblings, Sherlyn (Bruce) Brown of Russell, David (Kim) Hook of Russell, Cyndi Hook of Russell, Daryl (Cheryl) Hook of Tyler, James (Amy) Hook of Griswold, IA; his black lab, Bear; nieces, nephews, other relatives, and friends. Roger is preceded in death by his father, Ronald Hook; paternal grandparents, Percy and Violet Hook; maternal grandparents, Herman and Gertrude Kalass; and aunt, Sandy (Russell) Hauger.

The family of Roger Lee Hook created this Life Tributes page to make it easy to share your memories.

Send flowers to the Hook family.