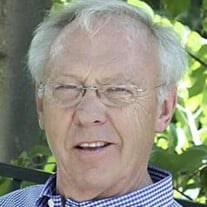 Marshall: Roger Tjosaas, 70, passed away at his residence on Monday, September 8, 2014. Funeral services will be 11:00 A.M. Saturday, September 13th at First Lutheran Church. Visitation will be 4:00 P.M. to 8:00 P.M. with a 7:30 P.M. prayer service Friday at the church and one hour prior to the service on Saturday. Roger Neil Tjosaas was born on May 14, 1944 in Benson to Hans and Violet (Mattson) Tjosaas. He was baptized and confirmed in the Lutheran faith. Roger graduated from Benson High School in 1962. He then went on to the University of Minnesota in Minneapolis. On February 26, 1966, Roger was united in marriage to Kathleen Melquist at Our Redeemer Lutheran Church in Benson. After the couple’s marriage, Roger worked at 1st National Bank in Owatonna, American Bank in Moorhead, and then Bremer Bank since 1983. After his retirement from Bremer, Roger worked for True Value in Marshall. Roger passed away at his home on Monday, September 8, 2014 after battling pancreatic cancer for over 2 years. He had reached the age of 70 years, 3 months and 25 days. Roger is survived by his wife, Kathy, of Marshall; two daughters, Kristin (and Mike) Corey, of San Francisco, CA and Jenny (and Jim) Wangdu, of Ramsey; four grandchildren, Lauren and Maxwell Wangdu and Violet and Keller Corey; siblings, Victoria Healy of Minneapolis, Richard (and Loretta)Tjosaas of Granite Falls, Eunice Fredrick, of Minneapolis, David (and Suzanne) Tjosaas of Appleton, Howard (and Boni) Tjosaas of Bradenton, FL, Jeanne (and Don) Berends, of Granite Falls, and Gary (and Sara) Tjosaas of Moorhead; and many other nieces, nephews, relatives and friends. Roger was preceded in death by his parents; and siblings, Homer, Gladys Bloom, Wesley, Lyle and Karen Minor. Roger’s enjoyments in life included golfing, cooking, traveling, fishing, gardening, hunting, and spending time with family and friends. He was involved in the Marshall Area Chamber of Commerce, Lutheran Social Services, YMCA, Hospice and various other organizations and community affairs. Roger was also an active member of First Lutheran Church. Roger will be deeply missed and never forgotten.

The family of Roger Neil Tjosaas created this Life Tributes page to make it easy to share your memories.

Marshall: Roger Tjosaas, 70, passed away at his residence on...

Send flowers to the Tjosaas family.