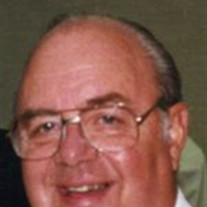 Marshall: Ronald “Ron” L. Carver, age 85, of Marshall, passed away at Avera Marshall Regional Medical Center on Friday, September 3, 2010. Funeral services will be 11:00 A.M. Tuesday, September 7th at Wesley United Methodist Church. Burial will be in Marshall Cemetery. Visitation will be Monday, September 6th from 4:00 P.M. to 8:00 P.M. with a 7:00 P.M. prayer service at Hamilton Funeral Home. Visitation will continue at church on Tuesday, one hour prior to the service. Ronald “Ron” Leland was born to Wesley W. and Neenah R. (Castle) Carver on October 15, 1924 in Lynd Township. He was baptized and confirmed at Wesley United Methodist Church. He graduated from Lynd High School in 1943. He lived in New Ulm, then farmed in the Lynd Township and eventually moved to Los Angeles, where he worked for Douglas Aircraft. He moved back to Minnesota in 1957.. On December 27, 1959 Ron was united in marriage to Sylvia Ann Cutler at the Methodist Church in Claremont, SD. They farmed in Lynd Township and Ron also was an airport operator at Ryan Field and real estate agent. He retired in the 1980’s. He loved music; playing at 4–H meetings through high school and then playing with many local bands. He spent two years on the road with the New Ulm dance bands such as Babe Wagner Band, Clem Rhody Band and the Six Fat Dutchman Band. He was a member of the “Over 60’s Band” and was inducted into the Minnesota Music Hall Of Fame. His other enjoyments included drawing, watching World War II movies and John Wayne movies, square dancing and wintering in Texas at the Split Rail Park, and jamming with the Music Makers at various other parks. His other loves included his wife of 50 years, his four children and his grandchildren and great grandchildren. Ron passed away at the Avera Marshall Regional Medical Center on Friday, September 3, 2010 after a courageous battle with canceer.. He had reached the age of 85 years, 10 months and 19 days. He is survived by his wife, Ann of Marshall; four children, Loronda (Steve) Schuler of Marshall, Brad (Paula) Carver of The Gap, Queensland, Australia, Jill (Jim) Kontz of Marshall, Chad (Rachele) Carver of Hill City, MN; 14 grandchildren Kris (Yvette) Carver Neenah (Eric) Eben, Heidi (Dave) Evans, Nicole Schuler, Erika (Jeremy) Gilbert, Stephanie (Lee) Poppe, Renee Carver, Mike Schuler, Whitney Kontz, Hunter Kontz, Sam Kontz, Drew Carver, Brooke Carver and Lauren Carver; and 15 great grandchildren. He was preceded in death by his parents, Wesley and Neenah Carver. Ron was a faithful member of the Wesley United Methodist Church where he was the Sunday School Superintendent and ushered for many years along with singing in the choir and playing in the Wesley Band. While in Texas he was a member of the church choir. Blessed Be The Memory Of Ron Carver Please designate memorials Prairie Home Hospice.

The family of Ronald L. Carver created this Life Tributes page to make it easy to share your memories.

Send flowers to the Carver family.