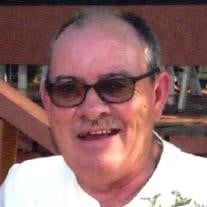 Ronald Dobrenski, age 75, of Minneota, Minnesota, died on Sunday, May 27, 2018, at his home. Memorial Gathering of Family and Friends will be at Ron's residence from 1:00 – 4:00 p.m., Saturday, June 9, 2018. The public is welcome to join family at the farm. Private Interment will be in Zion Evangelical Lutheran Cemetery, earlier on Saturday. Ronald Lee Dobrenski was born on May 28, 1942, in Marshall, Minnesota, to John and Agnes (Henrickson) Dobrenski. He was baptized and confirmed at First Lutheran Church and attended school in Marshall, graduating from Marshall High School in 1960. Ron was married to Joanne Kay Stelter on May 20, 1961 at Zion Evangelical Lutheran Church in Island Lake Township. He worked many years as a printer, first at the Marshall Messenger and then with Gesme Printing (now Western Printing) in Marshall, retiring at age 62. Before his retirement Ron and Joanie moved from Marshall to the farm in rural Minneota where he currently lived. Ron loved animals and being outdoors, you could often find him hunting, fishing, or in a game of horseshoes. He enjoyed playing ping-pong and darts while spending time with those close to him. Ron died on Sunday, May27, 2018, in Minneota, Minnesota, the day before his 76th birthday. Blessed be his memory. Ronald is survived by his 5 children, David Dobrenski of Marshall, Laurie Hoshino (Paul) of Maple Grove, Julie Michelson (Steve) of Cottonwood, Rick Dobrenski (Michelle) of Franklin, Wisconsin, Al Dobrenski (Sonia Jo) of Ruthton; grandchildren, Alex, Ellie, Sam and Henry Hoshino, Jamie (Kayla) Placsencia, Mike, Kainan, and Wyatt Dobrenski; great grandchildren, Owen Kaas, Christian and Dominic Placsencia; twin sister, Bonnie Larson of Marshall; nieces, nephews, other relatives, and friends. He was preceded in death by his wife, Joanne Dobrenski; parents, John Dobrenski and Agnes (Lyle) Wiegers; and brother, Jack Dobrenski.

The family of Ronald Lee Dobrenski created this Life Tributes page to make it easy to share your memories.

Send flowers to the Dobrenski family.